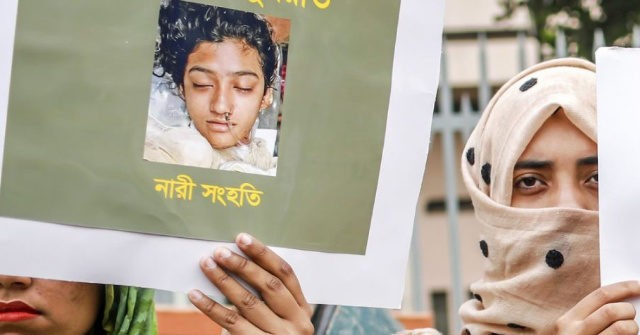 Police in Bangladesh announced on Wednesday they have arrested 16 people in connection with the burning death of teenager Nusrat Jahan Rafi, who was murdered after filing a complaint of sexual harassment against individuals at her school, including the principal. The girl was set ablaze with kerosene and died from her injuries after four days.

Bangladeshi police officials told CNN the principal is suspected of ordering Rafi’s death in retaliation for the criminal charge she brought against him:

The principal, Siraj Ud Doula, was subsequently arrested by police. He is suspected to have orchestrated her murder from prison, Muzumdar said. Doula allegedly contracted several people to kill the teenager and instructed the perpetrators to make her death look like a suicide, the official said.

On April 6, Rafi was lured out of the school classroom onto the roof where a group of men wearing burqas gagged and restrained her. They drenched her in kerosene before setting her on fire, Muzumdar said.

The incident took place in the town of Feni, about 100 miles southeast from the capital Dhaka. Rafi was able to make an official statement before succumbing to her injuries four days later.

Rafi’s statement prior to her death suggested four people – possibly boys – were behind the shocking attack – though she was unable to recognize them as they were hidden beneath the burqas, Muzumdar said.

The Daily Star of Bangladesh described the horrific deed as a “well-planned, grisly murder” that took three days to plan and execute. The school Rafi attended was an Islamic madrassa, or religious academy. The conspirators allegedly included teachers and students at the madrassa plus two local leaders of the Awami League, one of the major political parties in Bangladesh.

According to the Daily Star’s account, the plan was to pressure Rafi and her family into withdrawing the complaint against Principal Siraj Ud Doula and murder the teenager if the effort failed. Immolation was specified from the beginning as the method of her execution. The murder plot called for a large number of participants because they had to block the main gate of the madrassa and entrances to the building where Rafi was killed.

The Daily Star provided more chilling details of the murder, which began with the assailants luring Rafi to the roof by telling her one of her friends was under assault there and needed help. They demanded she withdraw her complaint and tried to force her to sign a blank piece of paper they could later forge into a legal document, but she refused.

At that point, the attackers restrained Rafi and doused her with kerosene poured into a drinking glass, one glass at a time, forcing her to watch in terror until the entire liter bag of kerosene had been emptied, then set her on fire with a wooden match.

Rafi’s death after four days in a burn unit sparked huge demonstrations across Bangladesh and kept intense public attention focused on the police investigation. The public was shocked and horrified anew when details of the large and complex plot to murder her were revealed.

The BBC noted on Wednesday that the story of Rafi’s abuse at school and the callous official response was a monstrous scandal even before she was murdered:

On 27 March, the 19-year-old accused the headmaster of the madrassa she attended of calling her into his office and repeatedly touching her in an inappropriate manner. She ran out before things could go any further.

She and her family went to the police on the same day and she gave a statement. At the police station, she was filmed by the officer in charge as she described the ordeal.

In the video she is visibly distressed and tries to hide her face with her hands. The policeman is heard calling the complaint “no big deal” and telling her to move her hands from her face. He has now been charged with illegally recording her statement and sharing it online.

After charges against the 16 conspirators were announced, the Bangladeshi government ordered all state-funded madrassas to appoint female mentors to protect students and eliminate the “culture of impunity” around sex crimes.

Women’s rights groups noted Bangladesh has experienced a surge of sex crimes in recent years, many of them perpetrated against children, but only three percent of rape cases end with convictions, and charges are rarely pressed for sexual harassment.

One of the most damning details of the case is that despite hatching a plan that involved 16 killers and accomplices, binding the victim hand and foot and immolating her on the roof of a school, the perpetrators reportedly thought they had a good chance of passing her death off as suicide by a girl distraught over falsely accusing the principal of harassment.

They did not count on Rafi making it off that rooftop alive, and they badly underestimated her courage. The BBC reported that her last statement was recorded on her brother’s mobile phone during her ambulance ride to the hospital because she feared she would not live long.

“The teacher touched me. I will fight this crime to my last breath,” she said in the ambulance, and she did.