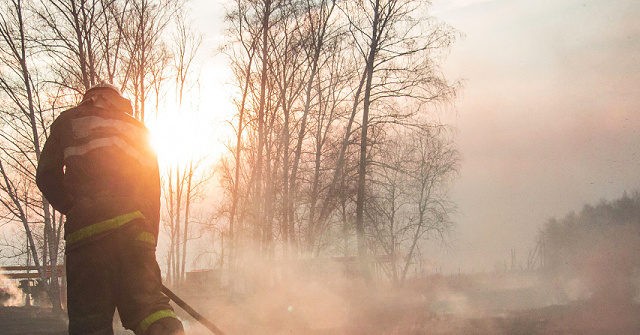 A West Virginia woman became highly concerned when a brush fire broke out near her home, but some neighbors quickly came to the rescue and helped keep her home safe.

Kasturi Bose was taking a stroll through her neighborhood on Martha Road in Barboursville on Friday when she smelled smoke, according to WSAZ. What she thought was a barbeque was actually a brush fire spreading along a hillside below her home, which started when intense winds dropped a tree onto powerlines.

The flames began to spread closer to her home.

“I saw big junks of actual fire from the tree bark flying to our front lawn,” Kasturi told WSAZ. “I was very, very afraid.”

The Barboursville Fire Department received a 911 call shortly after 3:00 p.m, the outlet stated in another report.

*** UPDATE*** Martha Road is expected to reopen soon. Fire officials believe the fire started when a tree fell on a…

Olivia Turnan, a high school senior, lives with her parents next door to Kasturi and her husband, Sujoy. Turnan and her parents quickly sprung into action, using shovels and rakes to keep the blaze at bay.

“Unfortunately the water was out because the power was out,” Turnan recounted to WSAZ. “There was a patch that spread because of the wind and was pretty close to their cars and house. We were able to kind of pat the flames out with our shovels.”

Sujoy, who was working when the fire ignited, said he had been worrying about such a scenario happening.

“This was just a ticking time bomb,” he told WSAZ. “Power lines are running through these trees, and it’s pure physics and basic science that even a little variation in the weather lets the trees touch the power lines.”

Barboursville, Ona, and Ohio River Road firefighters worked to contain the fire, according to WSAZ.

Kasturi praised her neighbors for their help in a terrifying situation.

A forester on the scene said the West Virginia Division of Forestry dealt with four fires in Cabell County Friday, WSAZ reports.

In a Facebook post, the West Virginia Forestry stated that brush fires were also present in Jackson, Kanawha, Lincoln, and Putnam counties and advised residents not to burn until wind and weather conditions improved.