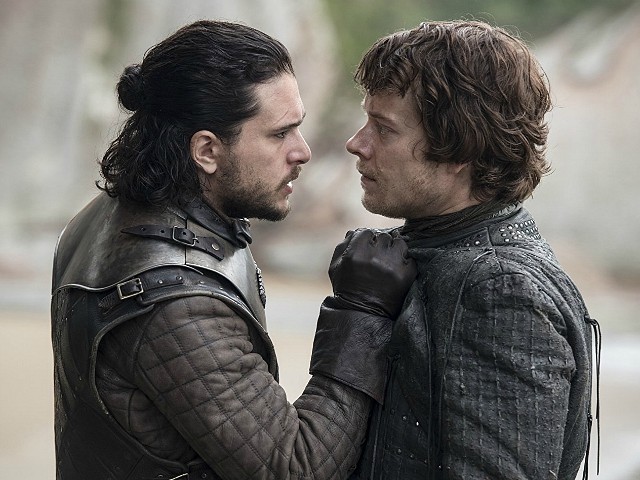 It’s kind of ironic because I started writing “Game of Thrones” all the way back in 1991, long before anybody was talking about climate change. But there is — in a very broad sense — there’s a certain parallel there. And the people in Westeros are fighting their individual battles over power and status and wealth. And those are so distracting them that they’re ignoring the threat of “winter is coming,” which has the potential to destroy all of them and to destroy their world. And there is a great parallel there to, I think, what I see this planet doing here, where we’re fighting our own battles. We’re fighting over issues, important issues, mind you — foreign policy, domestic policy, civil rights, social responsibility, social justice. All of these things are important. But while we’re tearing ourselves apart over this and expending so much energy, there exists this threat of climate change, which, to my mind, is conclusively proved by most of the data and 99.9 percent of the scientific community. And it really has the potential to destroy our world. And we’re ignoring that while we worry about the next election and issues that people are concerned about, like jobs. Jobs are a very important issue, of course. All of these things are important issues. But none of them are important if, like, we’re dead and our cities are under the ocean. So really, climate change should be the number one priority for any politician who is capable of looking past the next election. But unfortunately, there are only a handful of those. We spend 10 times as much energy and thought and debate in the media discussing whether or not N.F.L. players should stand for the national anthem than this threat that’s going to destroy our world.Will Florida’s Ex-Felons Finally Regain the Right to Vote?

The bearded lupophile appears to be somewhat shaky on his climate facts.

First, not even the most rabid alarmist has ever claimed that “99.9 percent of the scientific community” has conclusively proved the threat of climate change. (The usual completely made-up, thoroughly implausible, utterly discredited figure alarmists agree on is “97 percent”).

Secondly, if Martin began writing his Thrones series in 1991 then that would have been just a year before the Rio Earth Summit, which was the culmination of three years of preceding climate hysteria. The global warming scare really took off in 1998 when James Hansen, NASA’s house activist, gave his scaremongering testimony to Congress that the planet had never been hotter in recent history. (Later it emerged that the air con system had been deliberately sabotaged the night before to give the event more theatricality – with sweat visibly pouring down Hansen’s face). So in fact, contrary to Martin’s claim, pretty much everyone would have been talking about global warming when he started writing his book.

Thirdly, his claim that all other political concerns are irrelevant “if, like, we’re dead and our cities are under the ocean” may be trivially true – but it’s not a threat which many of his readership or the broader public finds particularly convincing. In surveys, climate change invariably comes right at the bottom of people’s pressing concerns. This also appears to have been born out by the result of the last US presidential, which was not won by Hillary Clinton. It was won by a president who has promised to put jobs first – and delivered on it.

Martin does not appear himself to be a fan of the President.

Here is his reply when asked which of his characters is most like Donald Trump:

I think even during the campaign I said that Trump reminded me most of Joffrey. They have the same level of emotional maturity. And Joffrey likes to remind everyone that he’s king. And he thinks that gives him the ability to do anything. And we’re not an absolute monarchy, like Westeros is. We’re a constitutional republic. And yet, Trump doesn’t seem to know what that means. He thinks the presidency gives him the power to do anything. And so, yeah, Joffrey is Trump.