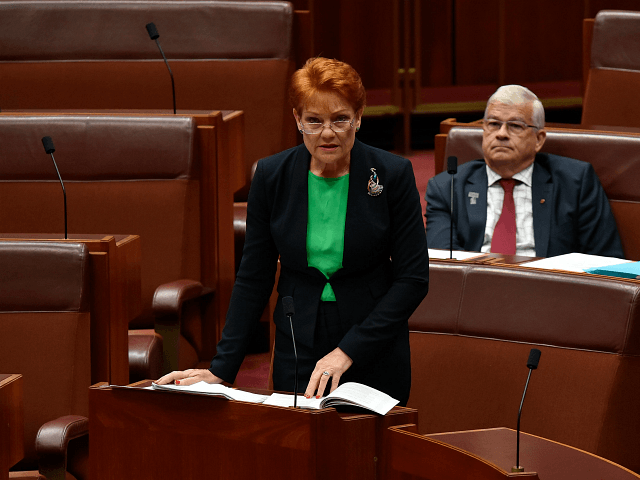 The Australian Senate has voted against the motion that “it is OK to be white”.

Introduced to the Commonwealth country’s upper chamber by Pauline Hanson, of the populist, anti-mass migration One Nation party, the motion also asked Senators to acknowledge “the deplorable rise of anti-white racism and attacks on Western civilisation.”

The vote was surprisingly tight, with Australia’s first parliamentarian of black African descent, Lucy Gichuhi, supporting Ms Hanson’s motion, but it was ultimately defeated by 31 votes to 28 — rather implying that it is perhaps officially not okay to be white in the former British colony.

The Australian Senate just voted on the motion “that it is ok to be white” moved by Pauline Hanson. The motion was defeated 31-28. #TheDrum pic.twitter.com/W5eVyvOiKA

When introducing her motion, Hanson had said that anyone “who pays attention to the news or spends any time on social media has to acknowledge that there has been a rise in anti-white racism,” as well as a “rise in attacks on the very ideals of Western civilisation.”

“I would also hope the Senate does the right thing and acknowledges it is indeed okay to be white. Such a simple saying should go without saying, but I suspect many members in this place would struggle to say it,” she added.

“People have a right to be proud of their cultural background whether they are black, white, or brindle. If we cannot agree on this, I think it’s safe to say anti-white racism is well and truly rife in our society.”

IS IT OKAY TO BE WHITE?@PaulineHansonOz calls on the Australian Senate to acknowledge rising anti-white racism, attacks on Western Civilisation and that it is okay to be white. pic.twitter.com/cSsy7iPDHl

Labour senator Kristina Keneally had sharp words for the Liberals — Australia’s conservative-leaning governing party, who backed the motion, accusing them of “[siding] with One Nation… on a motion straight out of the alt-right playbook”.

It is true that the slogan ‘It’s Okay to Be White’ is thought to have originated among alt-right users of the 4chan anonymous message board, but it appears to be Senator Keneally and the other opponents of Ms Hanson’s motion who have played into their hands — as the slogan’s reputed purpose is to goad leftists into voicing opposition to the statement, revealing what its proponents consider to be a latent anti-white bias.