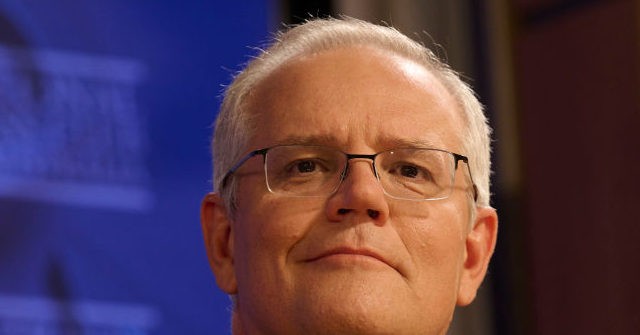 Australian Prime Minister Scott Morrison on Sunday called out China for being “chillingly silent” on the alleged looming Russian threat against Ukraine.

The Chinese Foreign Ministry pushed back on Monday, deploying one of China’s favorite diplomatic insults by accusing Morrison of having a “Cold War mentality.”

The latest exchange of verbal artillery between Australia and China began on Friday, when Chinese Foreign Ministry spokesman Zhao Lijian accused Australia of working with the United States, Japan, and India – fellow members of the alliance of democracies known as the Quadrilateral Security Dialogue, or more commonly “The Quad” – to sabotage rising China and preserve America’s ostensibly underserved global leadership.

“China believes that the so-called Quad group cobbled together by the U.S., Japan, India and Australia is essentially a tool for containing and besieging China to maintain US hegemony. It aims to stoke confrontation and undermine international solidarity and cooperation,” Zhao charged after a Quad meeting in Melbourne, Australia.

“I want to stress that as the Cold War is long over, the attempt to forge a so-called alliance to contain China wins no support and leads nowhere,” Zhao sneered.

The Quad evidently prompted this outburst by issuing a statement in which it pledged to “meet challenges on the maritime rules-based order, including in the South and East China Seas.” The big menace to order in those waters is Chinese territorial aggression.

India and Australia, which have particularly strained relations with China at the moment, promptly hit back at Zhao’s insults.

“We have a really practical agenda, which is evidenced by our support of access to vaccines, over 500 million vaccines delivered under the Quad leaders commitments on vaccination,” noted Australian Foreign Minister Marise Payne.

Australian Prime Minister Scott Morrison weighed in on Sunday after Australia announced it would vacate its embassy in Kyiv due to the looming threat of Russian invasion.

“I note that overnight Australia has been criticized by the Chinese Government for peacefully coming together with our partners in the Quad, with the United States, with Japan and India and working together to promote peace and prosperity in our own region, in particular to provide greater humanitarian support, working together to support countries in our region with [Chinese coronavirus],” Morrison said at a press conference.

“Yet the Chinese Government is happy to criticize Australia for engaging in such peaceful activities, but it remains chillingly silent on Russian troops amassing on the Ukrainian border,” he said.

Morrison noted China and Russia “work together” in the U.N. Security Council to further their menacing interests.

“You know, when autocracies start working together and cooperate and partner in this way, then that obviously raises real concerns for freedom-loving liberal democracies like Australia,” he said.

“We urge the Australian side to abandon the Cold War mentality and ideological bias and stop making belligerent rhetoric that will escalate the tensions. Such acts of seeking selfish political gains by clamoring for confrontation are unethical and dangerous,” Wang said.