A senior member of Australia’s parliament has taken protesters to task for massing on city streets across the country, saying their defiance of public health rules endangered the lives of others by being “reckless” and “irresponsible” at a time of a pandemic.

Senator Mathias Cormann, finance minister in the conservative coalition government,  said those who took to the streets in Sydney, Melbourne, Perth, Hobart and other regional centers over the weekend risked a second outbreak of the Chinese coronavirus.

Australia has had 7,255 cases of the coronavirus and 102 deaths, avoiding the higher tolls seen elsewhere because of border closures and strict social distancing since March. Small outbreaks, however, still emerge.

The national Black Lives Matter protests in Australia, called in support of those in America protesting the death of George Floyd,  came despite calls by authorities for people to stay at home and obey social-distancing rules that allow only for small groups to gather.

Cormann later told reporters many Australians had lost their jobs, the economy had suffered and people had been unable to attend funerals of loved ones in order to stop the virus.

“But we are going to have a mass gathering of tens of thousands of people in complete breach of the rules that apply to everyone else, it is absolutely reckless and irresponsible,” he said. 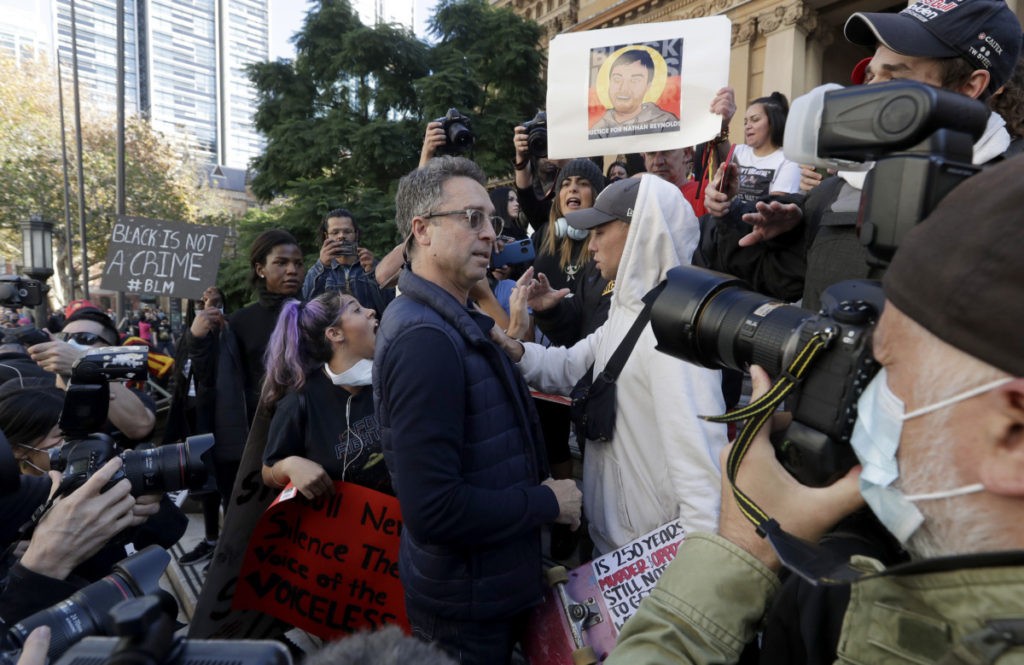 A man who appears to be a counter protester, center, is pushed away after briefly takes the stage carrying a sign saying, “White Lives, Black Lives, All Lives Matter” before police remove him as protesters gather in Sydney to support the cause of U.S. protests over the death of George Floyd.  (AP Photo/Rick Rycroft)

Australia’s Health Minister Greg Hunt agreed. He said he hoped the rallies would not lead to a new wave of infections, SBS News reports.

“We don’t know whether people will be infected,” Hunt told ABC radio on Sunday.

“But if there is someone who is infectious in the midst of a crowd like that, that can have a catastrophic impact.”