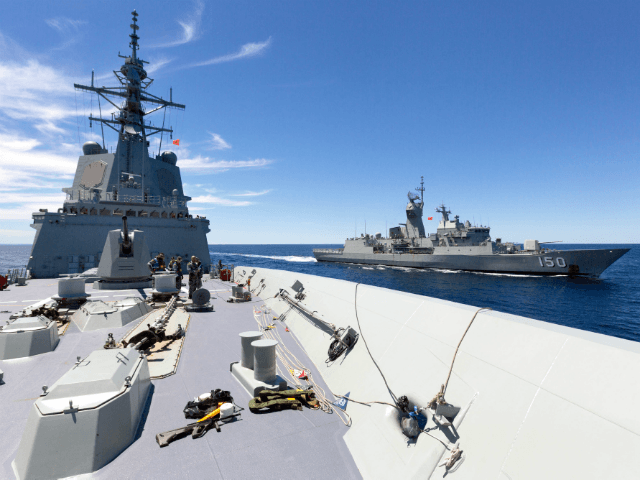 Australia announced that, for the first time since 2007, it will participate in the Malabar military exercises, joining India, Japan, and the United States in a large-scale naval drill designed to prepare for any potential Chinese aggression in the Indo-Pacific, Reuters reported Tuesday.

Authorities have not confirmed the location of this year’s drills, but reports suggest they will take place in the Bay of Bengal and the Arabian Sea, according to the Indian Ministry of Defense.

Though they have engaged in joint exercises before, the 2020 Malabar drills will mark the first time that all four members of the “Quad” — an unofficial coalition consisting of Australia, the United States, Japan, and India — have collectively run a joint training operation of this scale. Japan is participating despite not having a formal military since World War II, but a “self-defense” force.

Communist China has aggressively worked to expand its influence in the Indian Ocean in recent years, preying on impoverished nations with its Belt and Road Initiative (BRI), in which China offers them high-interest loans to pay Chinese workers for infrastructure projects. After the recipient nation inevitably becomes unable to pay back the loan, China acquires the project and its assets.

One of the victims of this diplomatic-economic scheme is Sri Lanka, an island nation off the Indian coast, which lost ownership of the Hambantota port, a crucial economic center, in 2017.

The BRI has faced international scrutiny from some participating nations, who have repudiated their deals or significantly slowed down local projects. In June, a Kenyan court vetoed a major China-sponsored railway development project for non-compliance with national law.

Another Indian neighbor, Pakistan, has received considerable aid from China via the BRI, sponsoring a number of infrastructure projects and prompting a dramatic rise in the country’s Chinese population. Despite Pakistan’s extensive cooperation with BRI, Prime Minister Imran Khan has reportedly stalled several projects, slashing the nation’s budgets and delaying projects over national security concerns pertaining to Chinese debt.

Pakistan, like China, shares a land border with India and is engaged in a longstanding territorial dispute over the Kashmir region.

The Malabar exercises come as the Quad nations, which have historically struggled to reach consensus on Chinese containment, face direct military action from Beijing. India and China have moved tens of thousands of troops to their shared Himalayan border amid an escalating border dispute, prompted by a deadly clash in June between the nations’ militaries in the Galwan Valley. The heightened tensions have led to the abandonment of the longstanding no-firearms policy at the border and international firefights in the Himalayas.

Chinese state media on Friday claimed the People’s Liberation Army Navy (PLAN) “expelled” an American destroyer, the USS Mustin, from the South China Sea near the Xisha Islands, known in the West as the Paracel Islands. https://t.co/v4O9dGTFz1

The Malabar drills appear to be the first Indo-Japanese effort in which the September treaty will have force.