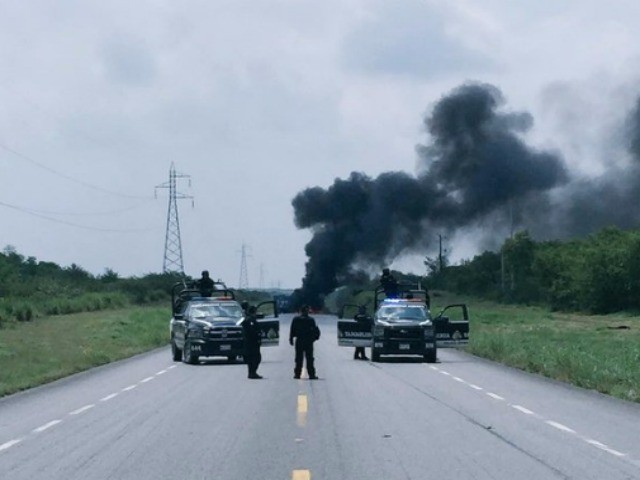 A group of cartel gunmen in the Mexican border state of Sonora opened fire on a truck they were pursuing, causing a crash. The attackers rushed to the scene to finish off the passengers on Sunday.

A group of gunmen opened fire during a high-speed chase of another vehicle in Cajeme, causing the truck to lose control and flip over, according to local reports. The gunmen then approached the vehicle and opened fire on the defenseless occupants–killing two and wounding two others, according to eyewitnesses. An audio recording of a call to authorities was on Facebook.

A male with a panicked voice asking for help is captured while a volley of gunfire and a woman crying out can be heard in the background.
The attack began in colonia Ejidal around 6:20 pm when a Jeep Cherokee was being chased by cartel gunmen in another vehicle. The gunfire caused the Jeep to eventually overturn. At least two of the shooters exited their vehicle and opened fire. It was reported that the gunmen initially attempted to stop the Jeep in what was believed to be a kidnapping attempt, according to local media sources. Two of the victims were identified as Francisco M., alias “El Jr.” and one “El Kangaroo.”

Investigators for the state attorney general’s office assumed the investigation. Counting these two homicides, there have been a total of 13 in the once peaceful municipality of Cajeme for the year.

Breitbart News reported on the escalating cartel violence in Sonora, which is attributed to a turf war between rival cartels. There are numerous homicide victims displaying the characteristic signs of cartel killings–such as the use of multiple rounds of military grade rifle fire; victims wrapped in sheets; or bagged and dumped to the side of the road with obvious signs of torture. Seven human heads were recently discovered discarded in the rural community of Bácum in September.

Mexican Federal Highway 15 runs through Cajeme, making it a valuable smuggling location to the north for cartels. The highway was recently used by the migrant caravan heading toward the international border with the United States.