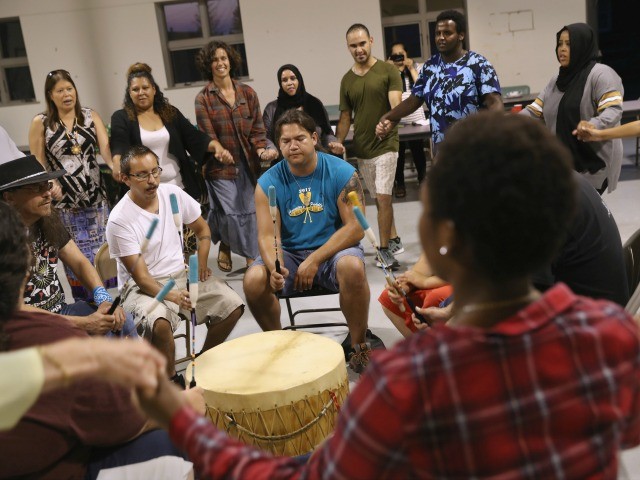 Immigration is splitting the United States into warring tribes, says an unusual article in the strongly pro-migration Atlantic magazine.

The article, headlined “The Threat of Tribalism,” admitted:

The causes of America’s resurgent tribalism are many. They include seismic demographic change, which has led to predictions that whites will lose their majority status within a few decades; declining social mobility and a growing class divide; and media that reward expressions of outrage.

But the mass immigration of 44.5 million people is the primary cause of the three other factors — “declining social mobility and a growing class divide; and media that reward expressions of outrage.”

Yet the authors do not even suggest any changes whatsoever to the replacement-level immigration which brings in one foreigner every year for every four Americans who turn 18, which lowers wages, and ensures an expanding array of rival languages and civic rules in the United States:

In 2017, there were 85 cities in which a majority of residents spoke a foreign language at home. These include:

All of this has contributed to a climate in which every group in America—minorities and whites; conservatives and liberals; the working class and elites—feels under attack, pitted against the others not just for jobs and spoils, but for the right to define the nation’s identity. In these conditions, democracy devolves into a zero-sum competition, one in which parties succeed by stoking voters’ fears and appealing to their ugliest us-versus-them instincts.

Again, the authors do not suggest any immigration changes that could lower public fears over the elite’s determination to change the nation’s identity to suit their elite interests.

Elite groups openly acknowledge that immigration is the force which now drives American politics — including the shocking election of real-estate developer Donald Trump in 2016. As New York Magazine says in a review of Chua’s earlier book:

Perhaps the most bitter of all contemporary political battles — and a Trump favorite — is immigration, which behind the ideological posturing is a referendum on whose tribe will control the country’s demographic future …

Similarly, a new study by authors from the University of Michigan argues that the nation’s tribal polarization is driven by rising racial and ethnic conflict:

Race/ethnicity now cleaves the parties more neatly than ever, and not simply because Democrats and Republicans disagree in their attitudes about race itself. In fact, whites are sorting out of the Democratic party at a significant rate while minorities are standing pat. Figure 1 presents evidence in this regard using the American National Election Studies time-series data starting from 1952. The growing racial gap between the two parties is evident. As the share of Whites among self-identified Democrats is rapidly decreasing (outpacing demographic changes in the country as a whole), the Republican Party remains overwhelmingly White. Our conjecture is that it is these changes in race and ethnicity that drive most of the affective polarization we have witnessed over the last 30 years.

By failing to identify immigration’s role in the problem, the two Yale authors are left with a few recommendations so vague as to be useless.

They urge that conservative Americans step up their efforts to persuade minorities that they are equal — as if Americans have not been trying to do that at enormous expense since the civil war, and as if immigration does not fuel the ethnic politics which denies equality between Americans and immigrants.

The Atlantic authors do offer some cautious criticism of the progressive left which has worked with business to impose and preserve mass migration, even after the 2016 election:

For its part, the left needs to rethink its scorched-earth approach to American history and ideals. Exposing injustice, past and present, is important, but there’s a world of difference between saying that America has repeatedly failed to live up to its constitutional principles and saying that those principles are lies or smoke screens for oppression.

But neither of those two recommendations address what the Yale authors admit is the primary cause of rising tribalism — the elite’s policy of importing foreign workers and their tribes into the United States.

Nor did they provide readers even a cursory description of President Donald Trump’s promised fix, his Four Pillars reforms.

Moreover, neither author acknowledges the basic reality that their peers in the elite do want tribalism to overthrow Americans’ shared, non-racial, civic culture, which the elites prefer to dismiss as merely a “white” culture. Chua indirectly admits this goal in her 2018 book, Political Tribes: Group Instinct and the Fate of Nations, as the New York Magazine reviewer describes:

Better-educated whites, who dominate the country’s political and cultural institutions and are the main beneficiaries of the globalized economy, have adopted as their “tribal” identity a sort of post-national cosmopolitanism, defined against what they regard as the provincial culture of poor whites …

it seems inevitable that American whites will lose their majority status sometime around the middle of the current century. More cosmopolitan whites tend to view this prospect with indifference or even excitement.

For example, Bloomberg writer Noah Smith welcomes the government-imposed foreign populations because it means that Americans cannot expect the millions of foreigners in their midst to follow Americans’ collective civic rules about how people are supposed to behave. Smith claims:

Diversity provides a backstop defense against the natural tendencies of homogenization and conformity … A country with institutions strong enough not to have to rely on homogeneity will be the strongest country imaginable.

But the civic culture destroyed by diversity includes shared expectations of civic equality within freedom, of Internet-enabled free speech and organization, and of debates over facts not feelings. The civic rules help Americans prevent their elite from segregating themselves into “oligarchical socialism,” globalist virtue-signaling, elite colleges and gated communities, stock-market wealth, and technological power over political debate.

Smith does admit his experiment with imposed civic variety may prove disastrous to American people:

I believe that there is a chance our experiment might fail. That building a free society from people of all races, religions, and national origins might in fact prove too hard a task …

But no matter the risk to 300 million non-elite Americans, Smith insists “the America experiment [with diversity] must continue.”

Smith counters polite criticism of his diversity-first argument by describing his critics as racists, so exemplifying the tribalism which Smith uses and which the two Atlantic authors claim to oppose:

1/Tucker Carlson’s question – “How is diversity our strength?” was not asked in good faith, but for purposes of racist demagoguery.

But I will try to answer it in good faith, because it’s an important question in its own right.https://t.co/9BTP6sm9eO

Of course, ordinary Americans — of all colors and classes and variations — are collectively pushing back against their hostile elite. New York Magazine insists on defining them see as “whites,” but the members of Trump’s multi-colored coalition have:

defined their tribal identity in opposition to the [elite] Establishment, which they perceive as a distant, occupying foreign power, indifferent to their interests and intent on elevating minorities and foreigners to pride of place within “their” country.

The Atlantic article can be read here.