On Wednesday, the Associated Press published an article full of glowing praise for China’s handling of the Olympics. Specifically, the AP tells readers just how delicious the Communist Party’s food has been.

But even as the AP told Olympics fans about the wonderful foods being served to the athletes, the article made no mention of the many athletes who have had just the opposite reaction to the food they are being served.

In the Wednesday article entitled, “ATHLETES ON: Best things they’ve eaten in the Olympic bubble,” the AP reveals several athletes who gush about the exciting foods they have been served during their stay in the Olympic village. 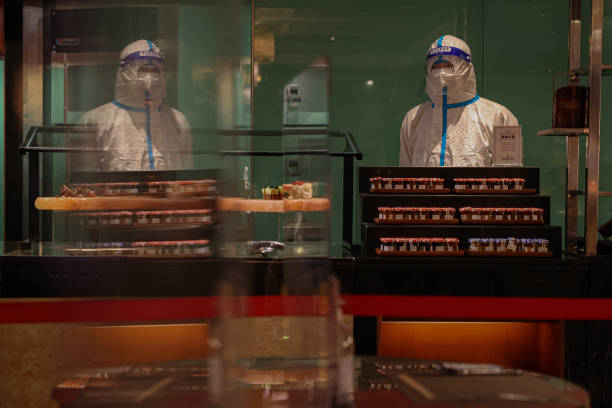 BEIJING, CHINA – FEBRUARY 10: A worker in a hazmat suit works in a hotel restaurant buffet section, which is part of the closed-loop Winter Olympics Accommodation Allocation Agreement (AAA) on February 10, 2022, in Beijing, China. (Annice Lyn/Getty Images)

The AP article praises foods supplied by the Chinese government, including the avocado ice cream, the “hot pot” meals, the rice, the noodles, the dumplings, and other delicacies.

But while the AP quoted German ice hockey players and figure skaters, Czech ice dancers, and a few others, the wire service completely ignored the mounting number of stories that have flooded out of Beijing featuring athletes charging China with starving them and offering terrible food to the athletes.

Last week, for instance, Forbes reported that many athletes have complained that they haven’t been getting enough food to fuel them for their high-energy activities.

Market Watch added that “Russian biathlete Valeria Vasnetsova shared a picture of what she said was being served as “breakfast, lunch and dinner for five days already” on Instagram: plain pasta, charred meat on a bone, an orangish sauce and no vegetables.”

Is China using quarantines to rig the Olympics?

A Russian athlete, Valeria Vasnetsova, has blown the whistle.

She says foreign athletes who test positive for covid are being starved, so they can’t compete even if they recover. pic.twitter.com/tM79dQZEID

The left-wing Daily Beast noted that some athletes report being “badly fed” and forced to stay in “cockroach-infested isolation hotels.”

The New York Post even claimed that some athletes fear that China is starving athletes to “manipulate” the competition.

Oddly enough, not one of these reports made their way into the AP’s plaudits for China’s Olympics food service.