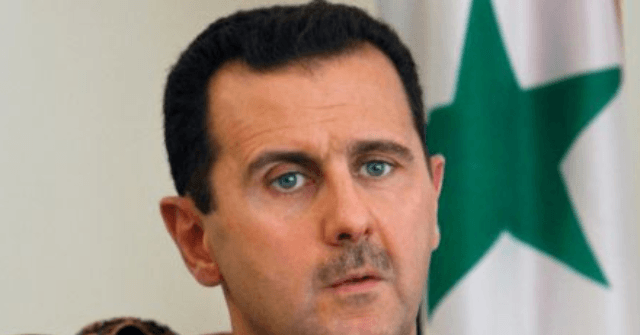 Syrian dictator Bashar Assad fired Prime Minister Imad Khamis on Thursday without explanation as Syria’s economy teeters on the edge of a meltdown and public anger spirals out of control, shaking a brutal regime that seemed to have consolidated its grip on power with Russian and Iranian assistance after a decade-long civil war.

The Associated Press reported that Assad abruptly sacked Khamis after four years on the job and replaced him with water minister Hussein Arnous, who will serve as prime minister until July’s parliamentary elections.

“There was no explanation for the sacking of Khamis, but the move appeared aimed at deflecting public anger, which has regularly targeted the prime minister but rarely the president himself. In the month’s time that he has in office, it remains unclear what the interim prime minister can do to try to salvage the staggering economic downturn,” the AP wrote.

Syria’s already shaky economy is about to take another hit from U.S. sanctions, imposed through the Ceasar Syria Civilian Protection Act, named after the pseudonym used by a disgruntled Syrian military photographer who covertly documented torture and other human rights abuses by the Assad regime. Under the Act, sanctions will be leveled against foreign entities that provide support to Assad’s military efforts.

The Syrian government panicked when the Ceasar Syria Civilian Protect Act went into effect, denouncing it as “economic terrorism” based on “lies and fabricated claims by enemies of the Syrian people.” The regime suggested new sanctions would interfere with its ability to handle the coronavirus pandemic and promised that the people themselves would feel the punitive effect of the sanctions.

Syria’s economy is already collapsing before the new sanctions go into effect, a process exacerbated by the economic crisis in Lebanon, through which much of Syria’s international commerce flows.

A second Associated Press piece on Friday noted there have been significant demonstrations against the rule of Assad himself, his Baath party, and his terrorist militia allies happening across Syria as the economy spirals out of control. These are remarkable gestures of defiance against a ruler who just spent eleven years proving he will stop at nothing to maintain his hold on power:

Syria faces near complete isolation as the toughest U.S. sanctions yet start to come into effect next week. While Assad may have won the military war against his opponents with the help of allies Russia and Iran, he now faces an even bigger challenge of governing while more than 80% of his people live in poverty.

In government-held areas, prices go up several times a day, forcing many shops to close, unable to keep up with the chaos. This week the Syrian currency dropped to a record 3,500 pounds to the dollar on the black market — compared to 700 at the beginning of the year. Some staples such as sugar, rice and medicine are becoming hard to find.

The BBC noted that Prime Minister Khamis was unceremoniously kicked out of his office after several days of protests in the city of Suweida calling for Assad to be overthrown. The residents of Suweida are mostly Druze, a divergent Islamic sect that has previously been loyal to Assad because it felt he protected them from other Muslims. Several other cities long seen as Assad strongholds have called for his ouster over the past few weeks.

Supporters of the new sanctions say they will effectively shut down the Assad regime’s financial support from the outside world, including its black market operations. Assad’s friends in Lebanon, which can ill-afford to feel the pinch from more sanctions, are already beginning to shut down smuggling routes into Syria.

This would scuttle Assad’s grandiose plans for rebuilding post-civil-war Syria and make it very difficult for his Russian and Iranian partners to realize the profits they anticipated when they intervened in the war on his behalf.

“From the beginning, this is what I’d hoped for,” activist Usahma Felix Darrah told Deutsche Welle on Tuesday as the new sanctions loomed. “Sanction anybody who does business with the regime, because there’s no other way to negotiate with Assad. There’s no other leverage that we have. These are the cruelest murderers that you will find on the face of the earth.”

The U.S. Embassy in Syria made it clear the economic meltdown is entirely Assad’s fault, and his only escape is to begin the political process that will end his bloody tyranny.

“The regime must take irreversible steps to implement a political solution to the Syrian conflict that respects the rights and will of the Syrian people, or face further targeted sanctions and isolation,” the U.S. Embassy warned.

“Bashar Assad and his regime are directly responsible for Syria’s economic meltdown,” the embassy declared. “The Assad regime squanders tens of millions of dollars each month to fund a needless war against the Syrian people instead of providing for their basic needs.”