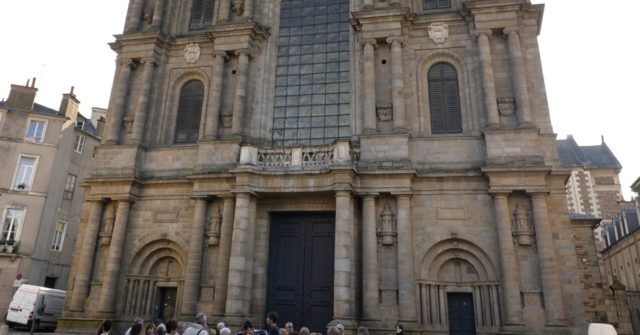 Unidentified arsonists placed a large trash bin against a side door of the Saint-Pierre cathedral in Rennes late last week and set the contents on fire, in an apparent attempt to torch the church.

Rennes firefighters arrived in time to put out the fire, which they believe to have been intentionally set since the bin was brought from an adjacent street and deliberately placed outside the door. The incident took place during the night from the 11th to 12th of June.

It was the owner of a neighborhood restaurant who sounded the alarm, shortly before 2:00am. “I started to smell a burning odor so I went to see if it was coming from our kitchens,” he said. “I went upstairs to the second floor and opened the window that overlooks the church.

“The smell was stronger and stronger and I saw neighbors running with buckets of water. They told me the cathedral was on fire,” he added.

Because of the swift intervention by firefighters, the fire was brought under control before serious damage except could be done to the church. The judicial police have taken charge of the investigation into the arson.

“There was no intrusion into the building,” said Father Erwan Delahaye, the pastor of the cathedral. “But the door was damaged, and was partially destroyed by the flames.”

The pediment and stones around the door, blackened by smoke, also suffered from the fire. The Regional Directorate of Cultural Affairs (DRAC) called on local craftsmen to carry out a temporary repair.

In April 2019, the Paris cathedral of Notre Dame caught fire and suffered extensive damage, including the loss of its spire. Investigators do not believe that the blaze was intentionally set.

Nonetheless, shortly before the Notre Dame fire a dozen Catholic churches were desecrated across France over the period of just one week.

During that week in March 2019, arsonists set fire to the church of Saint-Sulpice — one of Paris’ largest and most important churches — shortly after the twelve-o’clock Mass in what police determined to be an act of arson. The cost of restoration of the church from the fire damage caused was estimated at several hundred million euros.

In Nimes, near the Spanish border, the church of Notre-Dame des Enfants was desecrated in a particularly hateful way, with marauders painting a cross with human excrement, looting the main altar and the tabernacle, and stealing the consecrated hosts, which were discovered later among piles of garbage.

The church of Notre-Dame in Dijon, in Burgundy region, similarly suffered the sacking of the high altar and vandals took the hosts from the tabernacle, scattering them on the ground and trampling them underfoot.

A group of young men desecrated the village church of Lavaur, in the southern department of the Tarn, twisting one arm of a sculpture of the crucified Christ to make it appear that he was making an obscene gesture.

Although media were hesitant to attribute a particular religious or cultural origin to the desecrations, the incidents all shared a clear anti-Christian character.