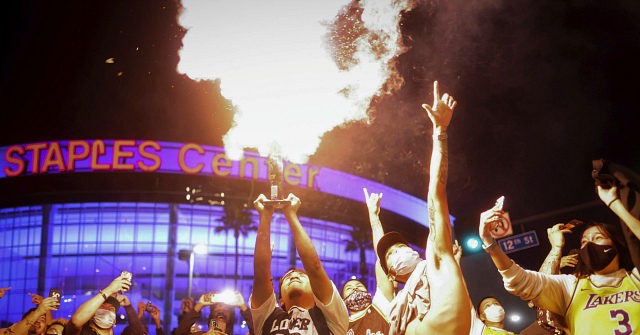 The Los Angeles Police Department (LAPD) issued a statement on Monday saying the violence that broke out in the city following the LA Lakers winning the NBA championship on Sunday resulted in 76 arrests.

What started out as a largely peaceful celebration of the Los Angeles Lakers NBA championship in downtown Los Angeles, turned into confrontational, violent and destructive behavior late last night. A crowd of more than 1,000 revelers descended into the area around Staples Center after the game. Unruly individuals mixed within the crowd began throwing glass bottles, rocks, and other projectiles at officers. That is when an unlawful assembly was declared, and only a limited number of people complied and began to disperse. A larger portion of the group broke off and began vandalizing businesses while continuing to engage in violent behavior, some aimed at responding officers.

In total, 76 individuals were arrested for Vandalism, Assault on a Police Officer, and Failure to Disperse. Two of the members of the crowd were injured by less lethal munitions fired by our officers, and they were taken to area hospitals. Eight police officers were also injured and received medical treatment. More than 30 buildings and establishments were damaged by the crowd, as well as a city MTA bus

2 injured by less lethal munitions fired by our officers pic.twitter.com/BZ2nYWHz3c

The Los Angeles Daily News reported that city officials had asked people to stay away from the area and to wear masks if they were in the area.

“It’s still not safe to gather in groups,” Garcetti said. “Let’s honor our city’s triumph by protecting others and making sure we don’t spread the virus.”

Breaking: Lakers fans are clashing with the LAPD outside Staples Center as police are forcing fans to disperse following the Lakers championship win. pic.twitter.com/voV0rFv2O2