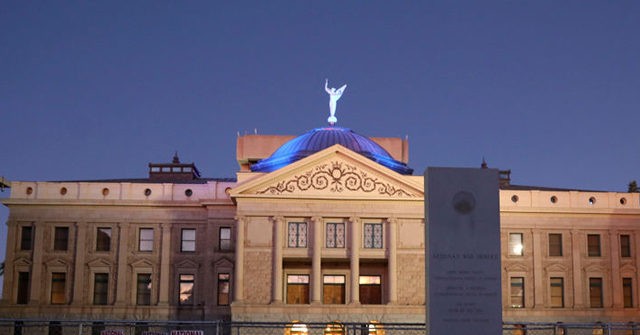 The Arizona House of Representatives has passed an election integrity reform bill that prohibits the private funding of election administration in the state.

HB 2569 passed the Republican controlled House in a party line vote by a 31 to 29 margin on March 3, and is now under consideration in the Arizona State Senate, where Republicans hold a 16 to 14 majority.

The bill passed out of the Government Committee of the Arizona State Senate after a 5 to 3 vote and is headed towards a vote by the full State Senate. Should the state Senate approve the bill, it will go to Gov. Doug Ducey (R-AZ) for signature.

The language of the bill is simple. The specific amendment to Section 1,  Title 16, Chapter 4, Article 1, of Arizona Revised Code is expressed in a single sentence:

Notwithstanding any other law, this state and a city, town, county, school district or other public body that conducts or administers elections may not receive or expend private monies for preparing for, administering or conducting an election, including registering voters.

The year “2020 was unprecedented, for the first time in history Americans saw a leftist billionaire spend nearly half a billion dollars to influence the management and administration of our nation’s general election,” state Rep. Jake Hoffman (R-Queen Creek), vice chairman of the Government and Elections Committee and primary sponsor of the bill, told Breitbart News in an exclusive interview.

“Free and fair elections are a cornerstone of American exceptionalism and the American people, and the people of Arizona, resoundingly reject any attempts by the billionaire class to influence or control our elections process,” Hoffman added.

As Breitbart News reported in December:

A report released by the Amistad Project of the Thomas More Society at a press conference on Wednesday alleged Facebook founder Mark Zuckerberg and his wife made $419.5 million in contributions to non-profit organizations during the 2020 election cycle–$350 million to the “Safe Elections” Project of the Center for Technology and Civic Life (CTCL) and another $69.5 million to the Center for Election Innovation and Research–that, “improperly influence[d] the 2020 presidential election on behalf of one particular candidate and party.”

“The 2020 presidential election witnessed an unprecedented and coordinated public-private partnership to improperly influence the 2020 presidential election on behalf of one particular candidate and party. Funded by hundreds of millions of dollars from Facebook founder Mark Zuckerberg and other high-tech interests, activist organizations created a two-tiered election system that treated voters differently depending on whether they lived in Democrat or Republican strongholds,” Amistad Project Director Phill Kline wrote in the report’s executive summary.

The report identified three key actions that, taken together, “represent the beginning of the formation of a two-tier election system favoring one demographic while disadvantaging another demographic.”

In the 2020 presidential election, President Joe Biden narrowly defeated former President Donald Trump in Arizona by fewer than 11,000 votes out of 3.3 million total votes cast and won the state’s 11 electoral college votes on his way to a 306 to 232 electoral college victory.

The controversial practice of private funding of county and municipal election procedures by the Zuckerberg-funded CTCL played a key role in four other battleground states Biden narrowly won: Michigan, Wisconsin, Pennsylvania, and Georgia.

The Zuckerberg-funded CTCL provided over $5 million in funding for the administration of the 2020 presidential election in nine Arizona counties, as the Capital Research Center reported:

As Breitbart News reported, the Arizona Senate recently won a court battle granting it access to review the 2.1 million ballots cast in Arizona’s Maricopa County in the 2020 presidential election.

Fox 10 Phoenix subsequently reported,”Republicans who control the Arizona Senate announced March 18 they now intend to do a complete recount of 2.1 million ballots in the state’s most populous county to ensure that President Joe Biden’s November win was legitimate.”

The Arizona House of Representatives has also passed a number of additional election integrity reform bills, which are also now under consideration by the Arizona State Senate:

HB 2054 will increase the accuracy of state voter rolls by mandating the Secretary of State compare death records with voter registrations and remove deceased voters. In addition to a monthly audit of deceased voters, this bill adds an annual review of the state voter registration database cross-referenced with an annual citizen death report from the Department of Health Services.

The Arizona House also passed resolution HCR 2023, which opposes HR-1, a bill many Republicans refer to as the “Corrupt Politicians Act,” introduced by Speaker of the House Nancy Pelosi (D-CA) that passed the U.S. House earlier this month in a strictly partisan 222 to 210 vote.

Hoffman told Breitbart News that state legislatures are acting now to ensure election integrity, in response to the attempts by Democrats at the national level to turn HR-1 into the law of the land:

Democrats’ “Corrupt Politicians Act” is the most dangerous piece of legislation to come out of DC in my lifetime. Their attempt to ban all voter ID requirements when 90% of voters approve of them is reprehensible.

The Corrupt Politicians Act is a naked attempt by Democrats to rig our nation’s election procedures in their favor and deny hardworking Americans their civil right to free and fair elections.

Integrity in our elections process doesn’t benefit Republicans and it doesn’t benefit Democrats; it benefits every single voter regardless of political party, race, gender or income.

The right to trustworthy elections isn’t a matter for partisan debate, it is a fundamental civil right that must be protected at all costs.

The American people are sick and tired of the double standard for the ruling class. Intentionally violating the law to infringe on the civil rights of voters and compromise the integrity of our elections should be met with real criminal consequences.