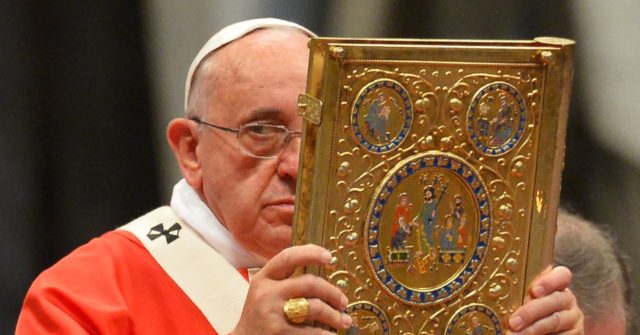 A former Vatican nuncio has accused Pope Francis of lying about not knowing Theodore McCarrick’s history of homosexual abuse, saying that the pope contradicts himself.

Archbishop Carlo Maria Viganò, who released an 11-page bombshell report last August in which he declared that in 2013 he had personally informed the pope of McCarrick’s misdeeds and of sanctions imposed in him by Pope Benedict XVI, says now that Francis is lying about what he knew.

What the Pope said about not knowing anything “is a lie,” Viganò said, “just like what he said about not remembering what I told him is a lie, when he was the one who asked me.”

The archbishop was responding to remarks made by Francis in a lengthy Spanish-language interview released by Vatican News Tuesday in which the pontiff finally broke an 9-month silence regarding what he knew of ex-Cardinal Theodore McCarrick’s behavior.

“About McCarrick I knew nothing — obviously — nothing, nothing,” the pope told Mexican reporter Valentina Alazraki.

“But you know that I knew nothing about McCarrick, or I wouldn’t have kept silent, would I?” he asked.

In a conversation with Lifesite News, Viganò noted that the pope had promised journalists that he would provide them documents relating to the McCarrick case, which he never did.

“Tell me how journalists are supposed to know the truth if you don’t provide the documents,” Viganò said. “How much time has passed since the Vatican promised an investigation? It’s all a contradiction. He completely contradicts himself.”

In a curious coincidence, the release of the pope’s interview coincided with the publication of leaked correspondence confirming that McCarrick had indeed been sanctioned by Pope Benedict in 2008 and that others, including Cardinal Donald Wuerl, knew about it.

Commenting on the report, Archbishop Viganò said that the correspondence demonstrates that the Vatican knew that McCarrick was sharing a bed with seminarians. “McCarrick admitted it,” he said.

“To defend himself with the Pope, McCarrick said he never had sexual relations with anyone, but that he slept in the same bed with seminarians and priests,” Viganò said.