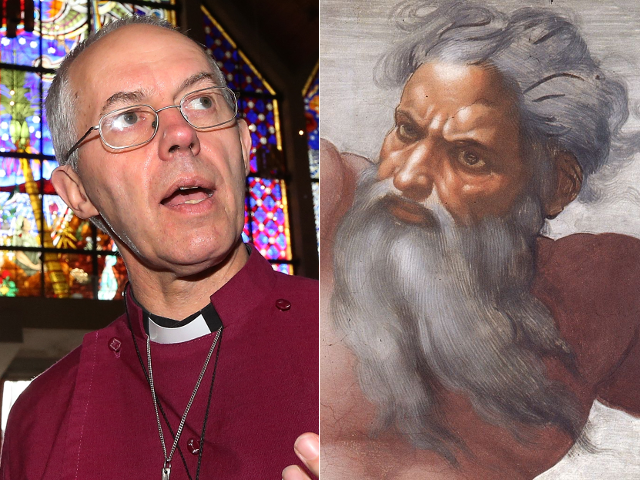 Archbishop of Canterbury Justin Welby has said that God is “not male nor female,” after female bishops demanded the Church of England stop referring to God solely as “he.”

The head of the worldwide Anglican communion told attendees at a lecture at St Martin-in-the-Fields in Trafalgar Square: “All human language about God is inadequate and to some degree metaphorical.

“God is not a father in exactly the same way as a human being is a father. God is not male or female. God is not definable.

“It is extraordinarily important as Christians that we remember that the definitive revelation of who God is was not in words, but in the word of God who we call Jesus Christ. We can’t pin God down.”

Professor of Christian history Diarmaid MacCulloch backed Archbishop Welby’s statement, telling The Times that the reason God has been perceived as male is due to “patriarchal assumptions” of early Christian societies of Greece and Rome.

Female Bishops Tell Church to Stop Referring to God as ‘He’ https://t.co/JH1TYAAlXB

“The  world is now different,” Professor MacCulloch said, “and we have to show that our view of God is wider than that and not get stuck with archaic terms.”

The comments by England’s most senior bishop follow those of the first female bishop Right Reverand Rachel Treweek, bishop of Gloucester, and Rt Revd Dr Jo Bailey Wells, Bishop of Dorking, who said in September that referring to God as a man was a “growing problem” and said the Church should stop referring to the deity as solely male.

Treweek argued that the use of male language could be damaging to young girls and boys, and that gendered language would be insufficiently welcoming to non-Christians.

Wells said she goes out of her way to use both “male and female imagery” when preaching.

In the U.S., the United Methodist Church voted down an amendment to its Book of Discipline in May that would have said God is not “male or female.”

Meanwhile the U.S. Episcopal Church set up a committee in July to “provide a pathway” towards revising its Book of Common Prayer to include gender-neutral language.

Church leaders called for the revisions to correct the “overwhelming use of masculine language” which they believe to be a “barrier to evangelising young people,” according to Fox News.