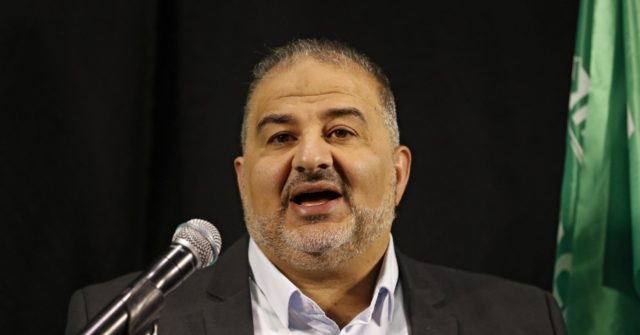 The leader of the Arab Islamist Ra’am party in the Israeli government, Mansour Abbas, denied Israel was an “apartheid state,” adding Jews are Arabs were “creating miracles” by ruling side by side in a coalition for the first time in Israel’s history.

His remarks come after the UK-based Amnesty International released an outlandish report accusing Israel is of apartheid against the Palestinians.

Israel’s Arab citizens – who account for 20 percent of the country’s population – enjoy full and equal rights under Israeli law and Arab Israelis hold the highest positions of power in Israel’s legislative, executive and judicial branches, as demonstrated by Abbas’ Ra’am party.

“I would not call it apartheid,” Abbas told the Washington Institute for Near East Policy, a D.C.-based think tank. Ra’am noted he could even join Israel’s cabinet if he wanted to.

Later, Abbas went on to say: “Learn what we are doing in the Holy Land, we are trying to create miracles.”

As several pundits have pointed out, Abbas’ remarks were not dissimilar to those made by staunch pro-Israel advocates.

One journalist quipped that Abbas’ comments were how an “Israeli politician would normally pitch to a U.S. Jewish organization.”

“Learn what we are doing in the Holy Land, we are trying to create miracles,” @mnsorabbas tells @WashInstitute – which is how an Israeli pol would normally pitch a talk to a US Jewish org

Abbas said, “We have coalitional discipline.”

When asked if he accepted Israel as a Jewish state, Abbas answered in the affirmative. He went on to explain that it was a practical recognition and that those who advocate a “state for all its citizens” – as many of the Palestinian side have called for – do not explain what that means. According to Abbas, the identity of the state as a Jewish one is “already settled.”