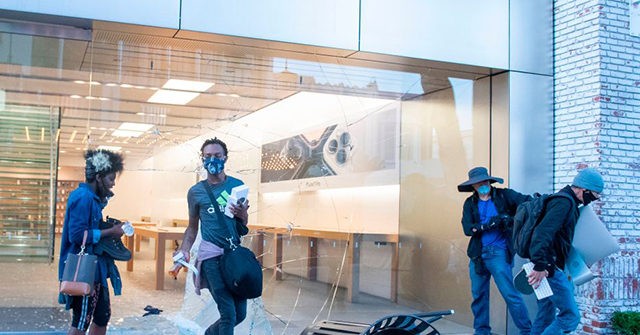 The string of high-end store robberies continued in California Wednesday with a last-minute smash-and-grab operation at Apple and Nordstrom stores while shopping continued for the holidays.

“Thieves rushed into a Southern California Nordstrom store the night before Thanksgiving and ran off with pricey goods in the latest in a string of organized retail thefts,” the Associated Press reported.

The AP report noted that five people, one of whom was wearing an orange wig, entered the Nordstrom store located in the Westfield Topanga Mall in the Canoga Park area of Los Angeles.

“It’s unfortunate because these people that are here are just trying to shop for the holidays [and] for their families,” said the LAPD Deputy Chief Alen Hamilton, according to KCAL. “We’ve deployed extra officers here. It just so happened that this was one part of the mall where they were able to get in and get out, even with our officers being deployed here.”

The LAPD reportedly started a special task force composed of veteran robbery-homicide detectives, who were on patrol at the mall; however, the suspects had picked a moment when law enforcement was not around.

KCAL reported that a security guard at the store confronted the thieves but was attacked and sprayed in the face with chemical spray. While law enforcement is still trying to determine what type of chemical was sprayed on the security guard, he was treated at the scene and later transported to a local hospital.

#BREAKING #BreakingNews
Police are responding to a possible smash-and-grab robbery at the Nordstrom store at the Westfield Topanga mall in #CanogaPark. pic.twitter.com/5XCkMsSwk2

On the same day, KPIX reported, “Police in Santa Rosa on Wednesday evening announced they are investigating a new daylight smash-and-grab robbery earlier in the day that targeted the Apple Store in Santa Rosa Plaza.”

KPIX noted that the police described the group as four young males between the ages of 14 and 18, wearing “mostly black or grey sweatshirts and jeans with masks covering their faces.”

Law enforcement responded to a call shortly after 11:30 a.m. local time. Police said the burglary happened in front of customers and staff and  the perpetrators made off with “over $20,000 worth of merchandise from the store before fleeing the area in an unknown vehicle.”

Breitbart News previously reported that other high-end stores in the San Francisco bay area were hit over the weekend, including in San Francisco’s Union Square Friday night, a Nordstrom location in suburban Walnut Creek Saturday night, and a Lululemon store in San Jose on Sunday.

Breitbart News also reported that the windows of Louis Vuitton and Saks Fifth Avenue stores on Beverly Hills’ famed Rodeo Drive were smashed on Sunday during an attempt to ransack the business. In addition to a Nordstrom store at the Grove shopping center on Monday night, police said at least 20 people attempted to break into the store as a window was smashed in with a sledgehammer.