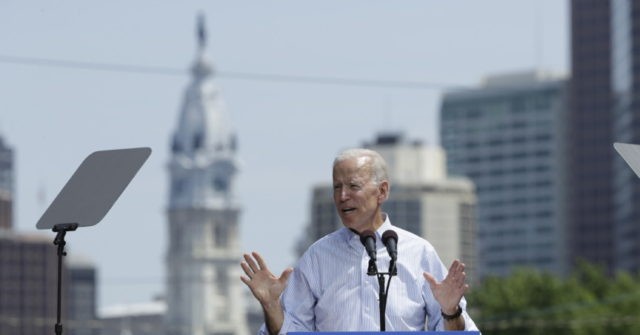 The left-wing activist group aligned with Rep. Alexandria Ocasio-Cortez (D-NY) over the weekend ripped former Vice President Joe Biden for urging Democrats not be “angry,” warning Democrats that “crowning” a candidate who speaks about “Kumbaya” like Biden could potentially backfire.

During his campaign kickoff event in Philadelphia, Pennsylvania, over the weekend, Biden said that Democrats do not have to be “angry” to win the nomination and beat President Donald Trump. Biden also made the central argument of his candidacy—that he is the Democrat best positioned to defeat Trump in 2020. The former vice president told the crowd that the first plank of his climate change platform is “beat Trump” because progressive policies cannot be enacted if Trump is still in the White House.

“They say Democrats are so angry, that the angrier a candidate can be, the better chance he or she has to win the Democratic nomination,” Biden said. “Well, I don’t believe it.”

Joe Biden calls for unity in first major 2020 campaign rally: “They say Democrats are so angry, that the angrier a candidate can be, the better chance he or she has to win the Democratic nomination. Well, I don’t believe it.” https://t.co/92X7mqIiRs pic.twitter.com/gtQZbPcThW

Waleed Shahid, the group’s communications director, ripped Biden for his past support for the Iraq war, unfair trade deals, and the credit card industry.

Saying Democrats should not be “crowning” Biden this early in the process, Shahid said on MSNBC that these are the issues that also “dogged” Hillary Clinton in her 2008 and 2018 presidential bids. He added that Democrats who “want a new face of leadership” want to “fight” and do not want this “kumbaya thing” and talk of unity.

He said electability is about “motivation” and not “moderation” and argued that while Biden wants to talk about standing next to former President Barack Obama for eight years, left-wing voters may be more concerned about “where he stood in his Senate years” on various policies.

Former supporters of Sen. Bernie Sanders’ (I-VT) 2016 presidential bid started the Justice Democrats group, and Alexandra Rojas, the group’s spokeswoman, criticized Biden for promoting “unity for the sake of unity” and said voters are “angry” because the economy has not been working for so many, especially for those who do not have enough savings to afford an emergency room bill. She said Biden just wants to ride Obama’s “coattails” and his call against “anger” is just “not going to cut it” for millions of primary voters.

“He literally was the architect of the 1994 Crime Bill. I think that voters have a lot to learn about his very public record beyond Joe Biden being vice president to Barack Obama,” she said.

The left-wing activist group was one of the first to attack Biden from the left just hours after Biden officially launched his campaign, defiantly saying that the former vice president “stands in near complete opposition to where the center of energy is in the Democratic Party today.”

“Democrats are increasingly uniting around progressive populist policies like Medicare for All, a Green New Deal, free college, rejecting corporate money and ending mass incarceration and deportation,” the group said then. “We don’t need someone who voted for the Iraq War, for mass incarceration, and for the Bankruptcy Reform Act while voting against gay marriage, reproductive rights, and school desegregation.”

Against a more traditional president, the Justice Democrats’ argument would gain much more traction on the left because elections against  incumbents are usually won when voters are motivated to vote for a candidate instead of just voting against the incumbent or for the lesser of two evils.

But in this election cycle, voters on the left detest Trump so much that they are treating, as Biden not-so-subtly mentioned in his announcement speech, “beat Trump” as the most important progressive litmus test. That is why Biden. who has been on the wrong side of nearly every issue of importance to today’s progressive activists, holds a commanding 19.5-point national lead in the RealClearPolitics average of the polls.