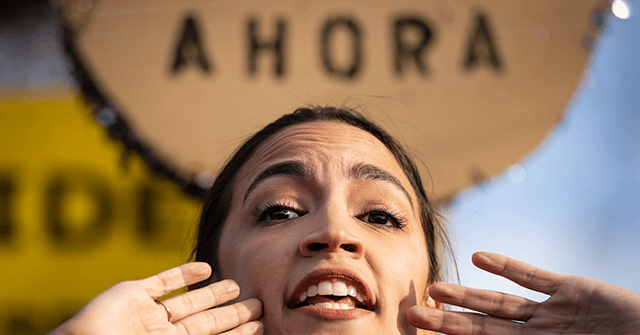 Rep. Alexandria Ocasio-Cortez (D-NY) announced Monday evening on Instagram she is taking a break from Twitter after feeling “anxious” upon being caught maskless and catching the coronavirus.

Responding to a comment on social media that noted she had been absent from Twitter, Ocasio-Cortez admitted she turned off social media while she recovered from the Chinese virus.

“That’s so funny that you bring that up,” Ocasio-Cortez said. “Yeah when I got covid I turned off all my devices, which means I wasn’t really on social media that much or anything like that.”

Ocasio-Cortez suggested after she recovered from the Chinese virus, she felt “anxious” about political opinions on Jack Dorsey’s platform.

“And I found that when I went to open Twitter up again, it just like wasn’t really making me…,” she said before the Instagram story frame ended.

“Literally, I would go to open the app and I almost felt like, anxious. People like, kind of fight and gossip, and all this other stuff so much,” she continued. “But, and there’s a lot of negative negativity on there, but I’ll be back. Don’t worry. Just a break.”

On two separate occasions, Ocasio-Cortez over Christmas break was seen maskless partying and relaxing in South Florida while her home state sheltered from the omicron spike:

Far Left Democrats have unanimously chosen the Free State of Florida as their Vacation Destination 🌞 pic.twitter.com/zSJ2BXT7V3

EXPOSED: AOC is STILL lounging it up in Florida, in large crowds and maskless. This time at a Drag Queen bar in Miami.

Rules for thee but not for me. pic.twitter.com/8l30GFA0GT

Ocasio-Cortez caught the Chinese virus on January 9, despite revealing she had received a coronavirus booster shot:

AOC has COVID. She was boosted. pic.twitter.com/czM0Z0rw65