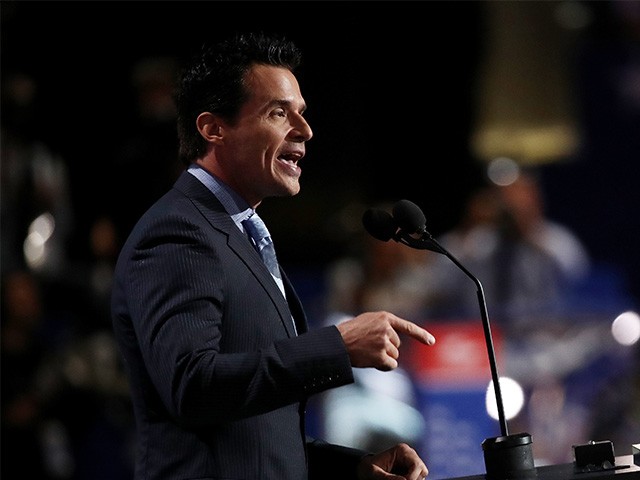 Sabato is challenging Rep. Julia Brownley (D-CA). The Golden State’s 26th district includes most of Ventura County and was represented by a Republican for ten years before 2003 and 2013.

All [Democrats] do in California is, they want to tax you, they want to push you out, and people are leaving the state and they’re not coming back. And [Julia Brownley] is a perfect example, because when she was in the assembly, she worked on AB-109, which is prisoner early release. That’s what they are. They want criminals to be outside. They don’t want law and order, anymore. They want open borders. They want socialism.

AB-109 is a California state law passed in 2013 which transferred ostensibly “non-violent, non-serious, and non-sex offenders” to country jails from state prisons. Breitbart News documented several instances of felons arrested for violent crimes following their early releases as a function of AB-109.

“[My constituents] are sick of it,” said Sabato of his opponent’s conduct. “I’m not a part of it; I’m not a politician yet. I’m just one American guy going, ‘You know what? My community deserves better.’ We’ve got to go to Washington and make sure my farmers are less regulated so their crops can be better, and they can make more money for their families and their communities as a whole.”

Sabato added, “My police officers need more backup. They need all the federal funding that says, ‘You know what? We’ve got to get the job done.’ That goes all across the board.”

[Julia Brownley] works for Pelosi. She gets paid by Pelosi. They don’t fight for the American people. They fight for their sorry kind of, what do you want to call it, a party? It’s socialism. It’s the worst kind. They used to be Democrats, and at least they stood for something. At least you could say they care for the country, but right now they don’t even care for anything except themselves and power and greed. I don’t want them in my county, and the American people are sick of it.

Sabato aligned himself with President Donald Trump while casting California Democrats as “socialists” who spread poverty.

Sabato continued, “These socialists, like Gavin Newsom and all these losers, who just want to tax people, and they just want more poverty, they want Venezuela to turn out to be California, and I’m not going to let it happen in my county. I’m going to save it if it’s the last thing I do on this planet because our people deserve better.”

Politics should not be a “business,” said Sabato: “This is about reaching out. This is not about raising money, because this is not a business. This is a pleasure for me and an honor to work, to dedicate my life to my country that has done so much for me, and that’s what it takes.”