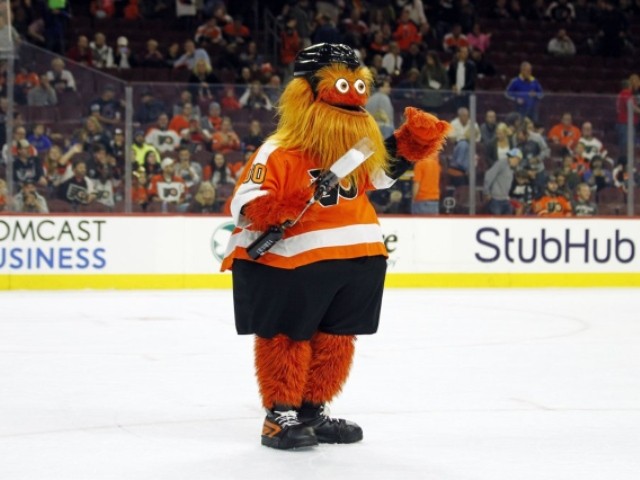 Left-wingers have adopted Gritty, the mascot of the Philadelphia Flyers, and forced it into service as a symbol of Antifa.

Gritty, the Flyers’ googly-eyed, orange-furred team mascot, has become a staple at Antifa protests in Philadelphia, appearing on signs, hats, shirts, and fliers handed out by liberals who claim to oppose “fascism.”

The mascot originally debuted for the Flyers only a few months ago, and, while some did not like the orange monster at first, it wasn’t long before the hardcore left glommed onto the creature as their own, taking him out of mere hockey mascottery and into the realm of anti-Trump, anti-Conservative politics.

Not long after Gritty’s debut ,the far left-wing magazine Jacobin celebrated Gritty as a “worker” starting the ball rolling for leftists to take Gritty as their own.  The move didn’t surprise The New Yorker’s Ian Crouch who thought is made sense because Gritty “does look a bit like an addled version of Karl Marx, or a deranged Fidel Castro.”

On the other hand, unlike Crouch, The Wall Street Journal’s Jillian Kay Melchior decried the politicization of Gritty saying, “Gritty belongs to Philadelphia, not to far-left activists.” Melchior added, “Not only can’t we have nice things, we can’t even have silly, creepy things.”

Whatever the propriety of the thing, left-wingers have taken possession of Gritty, exploiting his image with abandon. Most recently, Gritty artworks made their appearance when the right-wing group Proud Boys held an event in Philly.

Alright let’s do this Philly pic.twitter.com/gRMA3JwV66

So far, the hockey team has said nothing about its initially misfired mascot being used by the violent Antifa as its own symbol. Several news organizations have asked the team why it is siting back quietly as left-wing agitators use their new mascot at rallies and demonstrations. Apparently, the team is not very upset about it.