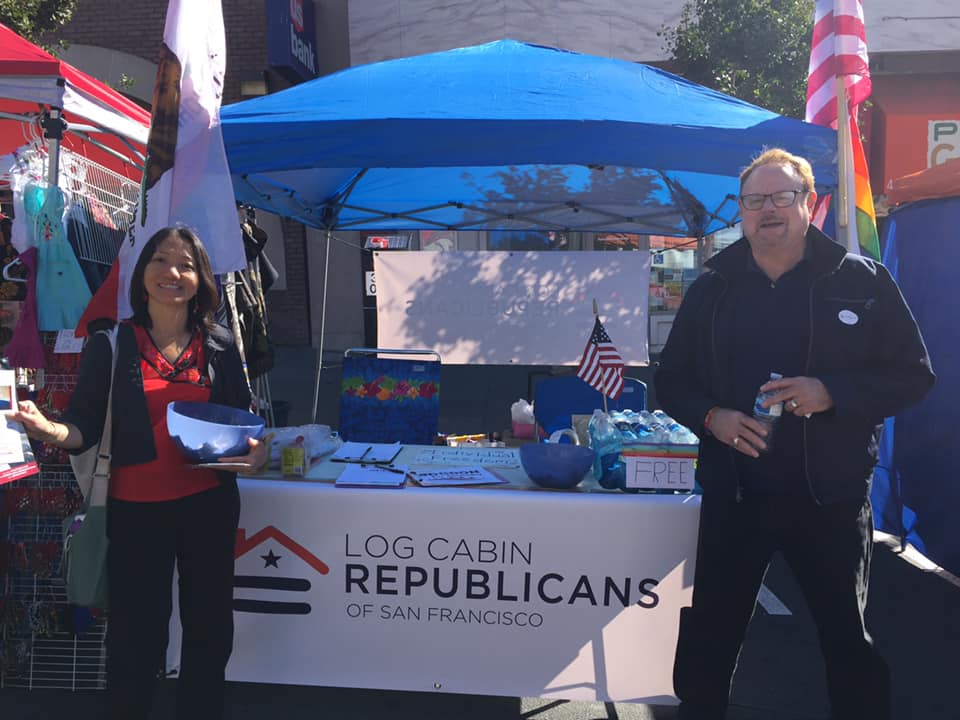 Radical left-wing activists from Antifa attacked a table set up by the Log Cabin Republicans, a gay conservative group, at the Castro Street Fair on Sunday in San Francisco, California.

The Log Cabin Republicans had set up a booth to provide information about its views, and to encourage like-minded people in the lesbian, gay, bisexual, transgender, and queer (LGBTQ) community to register to vote. A left-wing activist alerted Antifa — short for “anti-fascist,” though its critics believe otherwise — via Twitter and urged it to attack the Republican group. “To all #antifa of good conscience let’s take care of the fascists queers,” the message — which has not yet been removed — said.

Hey San Francisco… this is at the Castro st fair. To all #antifa of good conscience let’s take care of the fascists queers. pic.twitter.com/Y8CHmYbhZD

Later, an individual approached the booth and poured a red liquid — identified as Gatorade or Powerade — all over the table. One activist who witnessed the attack and spoke to Breitbart News said that the liquid made the entire table sticky and was very unpleasant.

A person approached the booth and engaged in conversation, but suddenly screamed F- Trump and poured Gatorade over the table damaging most of our material including the sign-up sheet

The police came, but could do nothing. They were VERY sympathetic and supportive however

Police arrived on the scene but were unable to do anything, as noted by civil rights lawyer Harmeet Dillon:

Antifa criminals attacked my friends at the Log Cabin booth today in SF at the Castro Street Fair. They were doing voter registration and petition gathering. @SFPD came but said they were unable to do anything. This is life for conservatives who get involved in California. https://t.co/6PH6PCQLfm

There will never be enough red Gatorade in the world to properly symbolize the blood some LGBTs, such as the Log Cabin Republicans, have on their hands from being conveniently passive and even fully complicit in the opression of their peers.

Yes, you heard us. We don’t want your so-called “gay rights”. We want queer liberation. And we will not accept it at the expense of our comrades.

Yes, the Gatorade was red. We know. We were there.

The group also responded to Dhillon on Twitter and attempted to justify the attack:

Antifa comrades protected my friends at the Castro Street Fair from fascist sympathizing Log Cabin Republicans. Hope y’all enjoy the blood on your hands from supporting fascist regimes here and abroad just as much as the red powerade https://t.co/ShGDnAiKTw

Fuck Trump, Fuck Log Cabin Republicans, and Fuck anyone attempting to enjoy comfort in their proximal position of power https://t.co/gYB5B6HkSX

The annual fair, held in the heart of the city’s gay community, was founded in 1974 by Harvey Milk, the openly gay San Francisco supervisor who was assassinated in 1978. The non-profit event celebrates “the diversity of the neighborhood” and includes art, vendors, and a open-air performances.

“People were more hostile this year than prior occasions,” Barry Graynor, secretary of the Log Cabin Rpublicans of San Francisco, told Breitbart News. “I felt the anger, and I felt the hatred much more. One person came over and just kept saying, ‘Fuck you, you don’t have any right to be here, you’re the party of hate’ — which I found ironic, given what he was saying.”