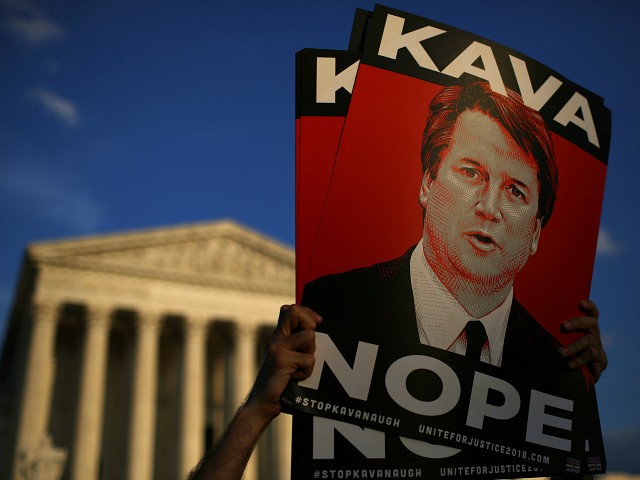 The left-wing activists behind the anti-Trump Women’s March staged after President Donald Trump’s 2016 election are part of the effort to protest Supreme Court Nominee Brett Kavanaugh on Thursday outside the E. Barrett Prettyman Federal Courthouse in Washington, DC, where Kavanaugh serves as a federal judge.

These groups claim their goal is to support sexual assault “survivor” Christine Blasey Ford, who has accused Kavanaugh of misconduct at a high school party in the early 1980s. Following 30-plus hours of confirmation hearings, the FBI is conducting supplemental background checks on Ford, Kavanaugh, and others this week because of Ford’s allegations.

“We’re marching from Kavanaugh’s current courthouse to the one he hopes to ascend to,” the Women’s March tweeted. “We’ll do everything we can to make sure he doesn’t get there. #CancelKavanaugh #BelieveSurvivors”

Thursday. 10/4. One week after #ChristineBlaseyFord bravely testified before @senjudiciary.

We’re marching from Kavanaugh’s current courthouse to the one he hopes to ascend to. We’ll do everything we can to make sure he doesn’t get there. #CancelKavanaugh #BelieveSurvivors pic.twitter.com/V8oyu0kxpR

According to the Google doc website #CancelKavanaugh.com, people can sign up for transportation to the protest, find housing, and attend a “training” session ahead of the main protest, which starts at 12:30 p.m. and includes a march to the United States Supreme Court.

THIS IS IT. We’ve seen that all your work over the past weeks and months have made a difference, but now we need to come out in huge numbers. If you’ve been looking for the right week to call in sick, cash in those vacation days, THIS IS THAT WEEK. Build a group from your area, work to put together carpools/shared trips as much as you can, and sign up below. #WeBelieveChristine #BrettBye #SavetheACA #DefendRoe #WomenDisobey

On the action network website, organizers claim that as a Supreme Court Justice, Kavanaugh “will roll back rights that women have worked for a generation to secure.”

“Beginning September 4th, a coalition of 20 women’s organizations will gather in Washington, D.C. to look our Senators in the eye and remind them that women across America are watching,” the website states.

“This Supreme Court will determine the future of women’s rights, voting rights, LGBTQIA+ rights, the environment, and the right to be free from discrimination in this country. We cannot allow our children and grandchildren to have fewer rights than we do.”

Organizers claim that Kavanaugh would “criminalize abortion, and punish women for making choices about our own bodies, they leave us with no other choice than to disobey.”

The Hollywood left is also jumping on the bandwagon. USA Today is reporting that Whoopi Goldberg, John Legend, Lena Dunham, and other celebrities will join the protesters:

Other musicians, actors and activists scheduled to participate include Erykah Badu, Maggie Gyllenhaal and husband Peter Sarsgaard, Norman Lear, and Michael Stipe, among others. Don’t look for them all to be in D.C., though. According to the site, “We will not all be in DC but ask you to walk out wherever you are.”

Another website from the left-wing Party Majority PAC includes the phone numbers of the Sens. Jeff Flake (R-AZ), Susan Collins (R-ME), Joe Manchin (D-WV), and Lisa Murkowski (R-AK), lawmakers who have not committed to voting for or against Kavanaugh and could make or break his confirmation.

Senate Majority Leader Mitch McConnell (R-KY) has said Kavanaugh’s confirmation will be voted on by the full Senate this week.