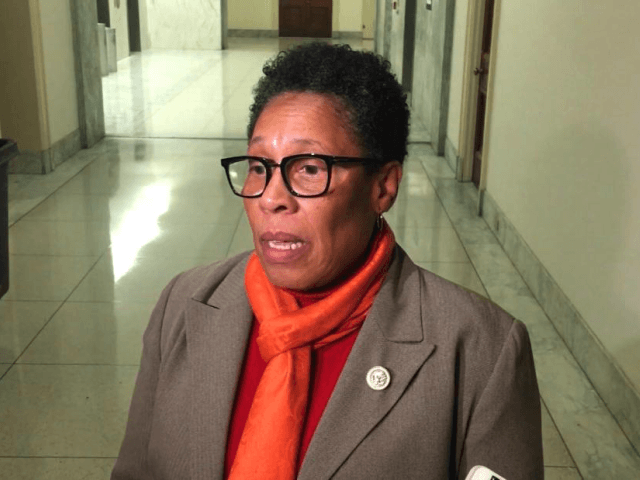 They were on a roll for weeks after the midterm election until now, but anti-Nancy Pelosi rebels inside the House Democrat Conference just hit their first major snag in the wake of Democrats taking control of the House majority next year: Their potential candidate for Speaker, former Congressional Black Caucus chairwoman Rep. Marcia Fudge (D-OH), is under fire for previously defending a judge now accused of brutally murdering his wife.

The vicious hit on Fudge comes after she had attacked Pelosi as an “elitist,” signed a letter with more than a dozen other Democrats vowing to oppose Pelosi for Speaker on the floor of the House early next year, and floated potentially running for  Speaker herself against Pelosi.

Specifically, what has emerged is a letter Fudge wrote in August 2015 defending former Cuyahoga County, Ohio, Judge Lance Mason during his sentencing over brutally beating his wife Aisha Fraser. Mason ended up spending nine months in prison for the 2014 assault on Fraser, and after his release from prison was hired by Cleveland Mayor Frank Jackson’s administration in a minority business development role. But the assault was brutal–he punched his wife 20 times, and smashed her head into the dashboard of their car, while their kids were watching in the back seat:

Mason in August 2014 punched his then-wife 20 times and slammed her head against the dashboard of his car five times, breaking her orbital bone.

The couple’s children were in the back of the car when the attack occurred. Mason, who previously served in the state legislature, was a sitting Cuyahoga County judge when the attack happened.

This account from Cleveland.com gives more details on the timeline of events, including how Fraser–then going by her married name Aisha Mason–had called 911 and told dispatchers she was afraid her husband would hurt her daughters.

In the wake of his arrest, indictment, and conviction the still-politically connected, though disgraced, former Judge got Fudge–who had just finished her term earlier that year as chairwoman of the Congressional Black Caucus in the U.S. Congress–to write a letter in favor of his case. In the “letter of support” for Mason dated on August 9, 2015, Fudge writes that her backing of him “comes as a result of more than 20 years of friendship.”

“Most assuredly, I am deeply saddened and disappointed at where we find ourselves today,” Fudge wrote to Cuyahoga County prosecutor Timothy McGinty. “The behavior Lance displayed on August 2, 2014, is out of character and totally contrary to everything I know about him.”

“I commend Lance for immediately recognizing that he needed help and entered counseling which continues as of this writing,” Fudge continued in the letter. “Further, he is working diligently to find a way to face what he has done to his family and his reputation. Lance accepts full responsibility for his actions and has assured me that something like this will never happen again.”

Fudge continues for another two paragraphs lavishing praise on Mason as a “good man.”

“Lance Mason is a good man who made a very bad mistake,” Fudge added. “I can only hope that you see in Lance what I and others see.”

Except, the problem for Fudge now, is that it does appear to have happened again–and this time it was much worse than the first time. Fraser was brutally stabbed to death and none other than Mason has been taken into custody by police. The Washington Post’s Michael Brice-Saddler reports on Tuesday:

A disgraced former judge who went to prison for beating his then-wife so severely in 2014 that she required facial reconstructive surgery was taken into custody after she was found slain Saturday morning, Ohio police said.

The Shaker Heights Police Department said officers responded to a 911 call at a residence in the morning, prompting them to launch an investigation into Aisha Fraser’s killing. Ex-Cuyahoga County judge Lance Mason, Fraser’s former husband, was taken into custody, police said.

Fudge’s decision to put her own reputation on the line for this guy in an official congressional letter in 2015, stating emphatically that he assured her this type of abusive behavior would never happen again, is coming back to bite her now that she is putting herself into the national political limelight in the fight for the Speakership of the House.

We have found a letter of support from @RepMarciaFudge during the 2015 sentencing of Judge Lance Mason after the severe beating of his wife Aisha Fraser. Mason is now the lead suspect in the weekend murder of Fraser. @cleveland19news pic.twitter.com/6Yzgw2gkkD

But now that Mason has been arrested in connection with Fraser’s murder,  Fudge is distancing herself from the man she defended to prosecutors just a few years ago. In a new statement released after his arrest, Fudge claimed she does not know him anymore:

My heart breaks for Aisha Fraser.  I pray for Aisha’s family, especially her children, as they attempt to deal with this tragedy.  My support of Lance in 2015 was based on the person I knew for almost 30 years – an accomplished lawyer, prosecutor, state legislator and a judge.  That’s the Lance Mason I supported.  The person who committed these crimes is not the Lance Mason familiar to me.  It was a horrific crime.  I and everyone who knew Aisha are mourning her loss.

It is hard to understate how critical this whole development is in the national political picture when it comes to the momentum of anti-Pelosi rebels, of which Fudge was absolutely one and perhaps the leader, in the lead-up to the early January 2019 House floor vote for Speaker of the House. Pelosi has been fending off a battle from inside her own conference, the fight of her life, of 17 Democrats including Fudge signed a letter released on Monday detailing how they intend to vote against Pelosi on the floor and in conference when it comes to who they support for Speaker. There are several more expected to oppose her on the floor who did not sign the letter as well. The conference vote will not be a problem for Pelosi, as all she needs there is a majority of the majority–which she already has–to win the official nomination of the Democrat Party for Speaker of the House. It is on the House floor where Pelosi is running into issues.

According to Politico, the Democrats will have anywhere from 233 to 235 seats in their new majority in the House depending on how the last couple races get called. Since a Speaker candidate needs to win a majority of members present and voting for a candidate–the candidate need not be declared or nominated, and eligibility is not confined to current members of the House but is much broader than that–that means Pelosi would need 218 votes assuming all voting members are present and vote for a candidate. Depending on those final House races, Pelosi could only afford to lose anywhere from 15 to 17 Democrat votes and still win the Speakership without GOP votes–even though some Republicans, notably Rep. Tom Reed (R-NY), have suggested they would be open to helping her in exchange for rules changes.

President Donald Trump has trolled Pelosi’s problems, saying on Twitter that he will get her whatever GOP votes she needs to win:

I can get Nancy Pelosi as many votes as she wants in order for her to be Speaker of the House. She deserves this victory, she has earned it – but there are those in her party who are trying to take it away. She will win! @TomReedCongress

But Pelosi has insisted she wants to win with only Democrats, because relying on Republicans would make her weaker among Democrats and strengthen Trump’s and Senate Republicans’ hands in negotiations on major issues between the chambers of Congress and branches of government.

Another problem the rebels against Pelosi have run into is not being able to field a candidate against her, and that is where Fudge came in. Fudge floated potentially running for Speaker herself against Pelosi in recent days, hitting the once-and-potentially-future Speaker Pelosi as an “elitist” who is out of touch with ordinary Democrats because she is so “wealthy.” Rep. Seth Moulton (D-MA), another leader of the anti-Pelosi rebels, has pushed Fudge as the alternative, saying she was his mentor in Congress and he backs her for Speaker.

But now, with Mason being arrested on suspicion of the murder of Fraser after Fudge defended Mason so vociferously just a few years ago, Fudge’s shot at the speakership just got a whole lot more complicated. And, if there is anything for the anti-Pelosi rebels to learn from their Tea Party anti-John Boehner rebels from the last generation in Congress, it is that to succeed they would need almost everything to go their way between now and the early January vote on the floor. Mistakes like this are costly.