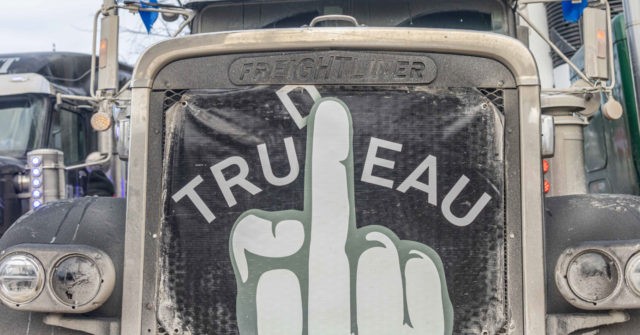 Trucker protestors against Wuhan coronavirus restrictions and vaccine mandates have resumed a border blockade in southern Alberta, demanding the return of more freedoms after the regional government scrapped the vaccine passport this week.

Truckers at the Alberta border with the U.S. state of Montana at the town of Coutts resumed their blockade of the border, demanding that all Wuhan coronavirus restrictions, such as vaccine mandates for cross border travel, be scrapped by the government.

The resumption of the blockade, which has lasted nearly two weeks, was revealed by the Alberta Royal Canadian Mounted Police (RCMP) on Tuesday evening, with RCMP Corporal Curtis Peters stating that the border area was being blocked by a number of tractors, CBC reports. The Washington Post further reported that the border remained blocked as of Wednesday and that truckers had said they had no intention of moving on until Justin Trudeau “moves”.

Alberta’s acting Justice Minister Sonya Savage stated Tuesday that the government and the police were looking into possible charges against the protestors for violating the provincial Traffic Safety Act and the Critical Infrastructure Defence Act, the latter of which could see the protestors get prison time.

Savage added that Alberta authorities may also invoke legislation that would allow them to seize the property of the protestors saying, “Those are pretty expensive vehicles that are on the side of the road, tractors and other equipment that could be seized and forfeited to the Crown.”

Protest organiser Marco Van Huigenbos stated that the protestors were willing to entirely close the border after agreeing to keep a single lane in both directions open last week.

“The blockade, you know, affects southern Alberta and Alberta negatively … we understand that,” he said and added, “So closing off the border, 100 per cent, all the time, is not something we want to do. It is something we are prepared to do.”

The resumption of the blockade comes as Alberta Premier Jason Kenney scrapped the province’s vaccine passport this week but stated that the QR code system will remain in place if businesses wanted to enforce the vaccine passport on their own.

Coutts morning update. Blockaders protesting mandates so to get their freedoms back continue to block border access, though they have briefly opened as they await a few cattle liners, which they will let through shortly.

The ambassador bridge, which connects the two cities, was closed over part of Monday night and into Tuesday morning.

“The Ambassador Bridge is a vital trade artery between Canada and the U.S. Many essential workers, including frontline health care workers, rely on it to get to work. Police are on the scene to ensure traffic is moving safely,” Ontario Premier Doug Ford said Tuesday.