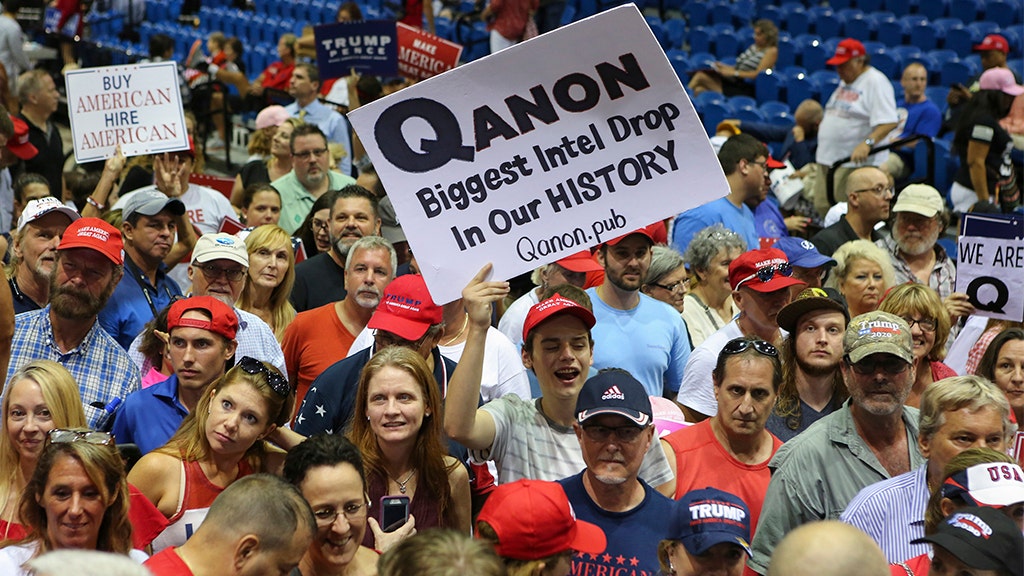 What to know about the QAnon conspiracy theory

Daily Beast tech reporter Will Sommer talks to Fox News about Q and the QAnon conspiracy theory. Learn about what it is and why it has been moving from the fringes of the internet into mainstream politics, and why that could be dangerous for everyone.

More than 75 anti-human-trafficking and victims’ services groups are pressing politicians, government officials and media organizations to combat conspiracy theories about trafficking designed to influence the upcoming election, according to a letter obtained by Fox News.

“As a diverse field, we acknowledge a spectrum of experiences, views, and approaches. We disagree a LOT. On this though, we stand UNITED,” said the anti-trafficking groups. “Anybody—political committee, candidate, or media outlet—who lends any credibility to QAnon conspiracies related to human trafficking actively harms the fight against human trafficking.”

Groups of survivors, researchers, service providers, human and labor rights advocates, religious organizations, law enforcement officials and policy experts are among the dozens that have signed on to the letter.

“It points to the gravity of the threat that organizations from the more left leaning to the more right leaning have come together and said, ‘we stand in solidarity that these conspiracy theories are harmful to the real work we are doing each and every day,’” said a person involved in the drafting of the letter.

The QAnon conspiracy movement surfaced in 2017 and pushes a wide network of elaborate misinformation including the baseless belief that President Trump is waging a secret campaign against a cabal of Democrats and celebrities running a child sex trafficking ring.

“The majority of trafficked youth have been abused or neglected, have run away or don’t have stable housing, or are immigrant children fleeing violence in their home countries to seek refuge in the United States,” according to the groups’ letter. “They are the youth that we as a society have failed. They are not abducted by strangers or Hollywood elites – they are abandoned by failing and under-resourced systems.”

QAnon followers have been accused of hijacking the anti-human trafficking slogan “save the children” to push a political agenda on social media.

In July, Polaris, a nonprofit organization working to combat human trafficking, said its National Human Trafficking Hotline had received hundreds of reports “that reference a series of viral posts claiming online retailer Wayfair has been involved in a complex scheme involving sex trafficking of children.” Polaris said calls based on that conspiracy theory overwhelmed its system, making it difficult for the group to help real victims.

The conspiracies have entered American politics, and many of its supporters back the president. Those behind the letter say the timing has nothing to do with politics and that its release is motivated by a growing concern among these groups that misinformation is hindering their already demanding missions.

Only groups – no individual’s names – appear among the signatures, as those involved in writing, circulating and signing the letter say they are worried about QAnon followers posting their personal information online.

“The fear is real, and I can’t tell you the number of conversations we’ve had over the last week asking for help with security for the organization,” said one person involved in drafting the letter. “This letter could have had a lot more signatures on it. If there weren’t very real costs associated with it.”

After fueling QAnon’s growth, social media companies have announced they are removing the movement’s content. Last week, citing QAnon, YouTube announced it would “prohibit content that targets an individual or group with conspiracy theories that have been used to justify real-world violence.”