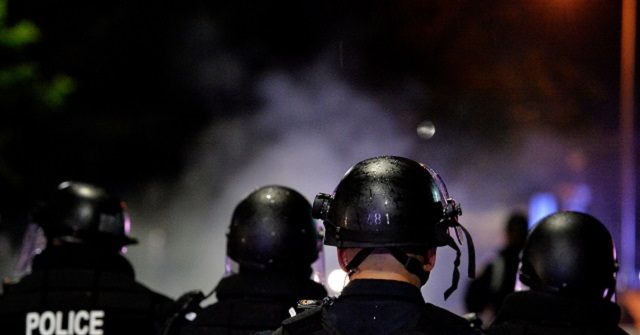 Rioters in Providence, Rhode Island, threw fireworks, bricks, rocks, and bottles at police officers, according to the police commissioner and a state police investigator. The objects struck at least five officers and sent one to the hospital.

Protesters took to the streets of Providence following an incident on Sunday where a moped being pursued by police crashed and left the driver hospitalized with a serious brain injury, ABC6 reported. A video shot by a bystander suggests the police cruiser engaged in the pursuit may have struck the moped as it lost control rounding a corner.

A protest broke out on Tuesday that began peacefully and then turned “more aggressive” after the sun went down, Providence Police Chief Hugh Clements told reporters during a Wednesday morning press conference.

The state police commander said there was a distinct difference between the initial protesters and those who acted out against police later in the night. He said most of the early protesters went home before the trouble began.

You can see in upper left-hand corner several objects hurled at police from protesters @ABC6 pic.twitter.com/NtVtgOPUrN

Clements said the Providence police officers came under fire of fireworks, bricks, rocks, and bottlers from elements of the protest group. He said the officers showed “incredible restraint amidst that chaos and violence.

“Fireworks were being shot AT Providence police officers,” the colonel said emphasizing the word “at.”

“Five police officers were hit with objects,” Clements explained. “One was transported to the hospital. Thank God he had his helmet on. It saved him.”

An injured officer is being put into an ambulance on a stretcher pic.twitter.com/d7MdRKO1Hy

Clements said the officer suffered a concussion-type injury and the other four officers were fine. A police K-9 was also hit and had to be treated for an injury.

In total, police arrested 21 people during the incidents. He said 16 were males, including one juvenile, and five were females. Only nine of the 21 people arrested were from Providence. Breitbart News reached out to Providence Public Safety officials to inquire where the other 12 people were from. An immediate response was not available.

He said the charges against the 21 people include resisting arrest, obstruction, disorderly conduct, and fireworks.

A joint investigation that includes the Rhode Island Attorney General, the Rhode Island State Police, and Providence Public Safety officials is attempting to develop the facts of a crash that left 24-year-old Jhamal Gonsalves hospitalized with a serious brain injury. Videos gathered so far do not reveal conclusive information as to how Gonsalves sustained the injury.

A Providence Public Safety Commission spokesperson told Breitbart there are no police dashcam videos available. Officials say they are preparing police body cam videos for release. They say they currently have no video that captures the exact moment of impact.