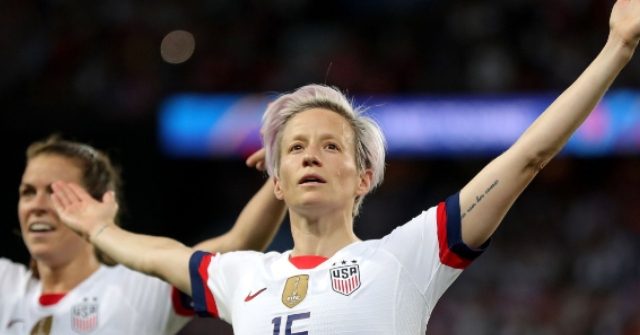 Striking back against those criticizing her for perceived anti-American comments, U.S. Women’s soccer star Megan Rapinoe insists that she is in fact, “extremely American.”

After taking weeks of criticism for her refusal to go to the White House as well as her refusal to stand and sing the American national anthem during the World Cup games in France, the U.S. Women’s co-captain once again dove into political waters during comments with the press.

With her team on the verge of entering the finals in the Women’s World Cup, Rapinoe insisted that she is “extremely American,” according to the New York Post.

“I think I’m particularly and uniquely and very deeply American,” Rapinoe told the press about the games. “If we want to talk about the ideals that we stand for, the song and the anthem, and what we were founded on. I think I’m extremely American.”

Rapinoe went on to say that she stands for “truth.”

“I know that I’m not perfect. But I think that I stand for honesty and for truth and for wanting to have the conversation. Looking at the country honestly and saying, yes, we are a great country, and there are many things that are so amazing, and I feel very fortunate to be in this country. I would never be able to do this in a lot of other places,” the soccer star explained.

“But also: that doesn’t mean we can’t get better. It doesn’t mean we shouldn’t always strive to be better,” the 33-year-old player continued.” I think that this country was founded on a lot of good ideals, but it was also founded on slavery. And I think we just need to be really honest about that and be really open in talking about that so we can reconcile that and hopefully move forward and make this country better for everyone.”

The outspoken player has been protesting during the anthem for years. Indeed, because she persisted in taking a knee during the national anthem during the 2016 and 2017 seasons, U.S. National soccer had to create a new rule requiring the players to stand during the Star-Spangled Banner.

Rapinoe warmed the bench with a pulled hamstring for her team’s semi-finals win over the UK team on Tuesday.