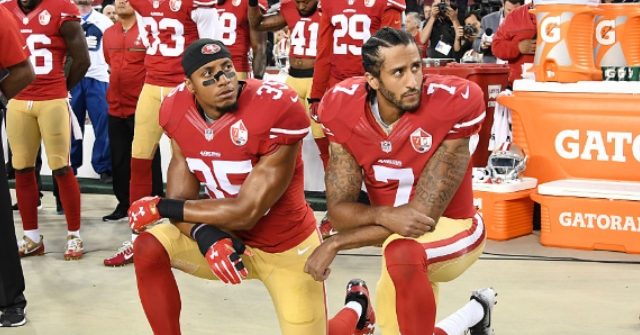 The man who first took a knee next to Colin Kaepernick in his anthem protest movement, is no fan of his former club’s attempt at showing solidarity with blacks and the Black Lives Matter movement.

On Tuesday, Reid captioned a #BlackLivesMatter #BlackoutTuesday tweet from the 49ers with the comment, “I think you meant Blackball Tuesday…I digress.”

The former Niner then went on to add the definition of the word hypocrisy. A word Reid clearly believes applies to the 49ers in light of how he and Kaepernick were treated in San Francisco.

Hypocrisy: the practice of claiming to have moral standards or beliefs to which one’s own behavior does not conform; pretense.

Of course, Kaepernick left the 49ers because he opted out of his contract, not because he was blackballed by the team.

Nonetheless, Reid then went on to caption the #BlackoutTuesday tweets of several other NFL teams including the Bears with the words, “Blackball Tuesday.”

Reid, unlike Kaepernick, still has a job in the NFL. The former LSU Tiger has a contract with the Carolina Panthers that will carry him through the end of next season.