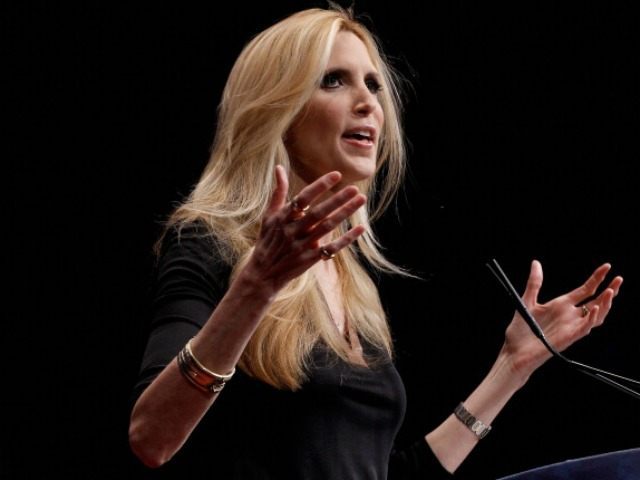 In a new profile by The Guardian, Coulter explains how the country’s legal immigration system — importing more than 1.5 million immigrants every year — is beneficial to the wealthiest of Americans while driving down the wages of the poor and working class.

Immigrants are great if you’re rich. You live in New York or LA, you get your pool cleaned. Rosa the maid cleans everything, serves, picks up the kids, makes the beds. Life is grand. But I go out to America. And I knew that immigration was an enormous effing issue that our political class – Republicans for the donor money, Democrats for the votes – was ignoring. [Emphasis added]

“It wasn’t long ago that Harry Reid was on the Senate floor denouncing anchor babies,” Coulter said.

“So this is, number one, a very recent policy of the left, and, number two, it’s clearly utterly political and self-interested,” Coulter continued. “Immigrants since 1970 vote about 80 percent for the Democrats. Democrats have no right to bring in millions of people who are going to vote for them any more than Republicans do. And the reason they cry racism is they don’t want to talk about it.”

As Breitbart News has extensively reported, the U.S. is on track to import about 15 million foreign-born voters by the year 2038. That is nearly quadruple the size of the annual number of U.S. births; about four million American babies are born every year.

Through chain migration alone, the U.S. will import about eight million foreign-born voters in the next two decades.

The country’s continued mass immigration policies are likely to hand over electoral dominance to Democrats in statewide and national elections, Breitbart News has noted.

Coulter took to Twitter to correct inaccuracies in The Guardian profile. For example, the profile falsely claims that Coulter was “fired from MSNBC for telling a disabled Vietnam veteran on air that people like him were to blame for losing the war. (She later said she didn’t know he was disabled.)”

The false MSNBC incident was first published by Howie Kurtz in the Washington Post in 1998 where he wrote “Coulter was debating a disabled Vietnam vet when she snapped: ‘People like you caused us to lose that war.’ (She says she didn’t know the guest, appearing by satellite, was disabled.) That ended her MSNBC career.”

The conversation actually went as follows:

Coulter: “No wonder you guys lost.”

Btw, Oliver, I NEVER SAID THIS:

“and been fired from MSNBC for telling a disabled Vietnam veteran on air that people like him were to blame for losing the war. (She later said she didn’t know he was disabled.)” https://t.co/upC2F0MPYj

If you’d asked me, Oliver, I could have told you this quote was invented by Howie Kurtz. John Cloud was the ONLY REPORTER to ever order a tape of it from MSNBC, for his Time mag cover story on me, setting the record straight. https://t.co/upC2F0MPYj

Another false misrepresentation in The Guardian is the reporter’s assertion that “Few consider Coulter a serious intellectual.”

Research into Coulter’s intellectual status by The Guardian would have revealed that the right-wing author was actually listed as one of America’s top 100 intellectuals in Richard Posner’s Public Intellectuals: A Study of Decline.