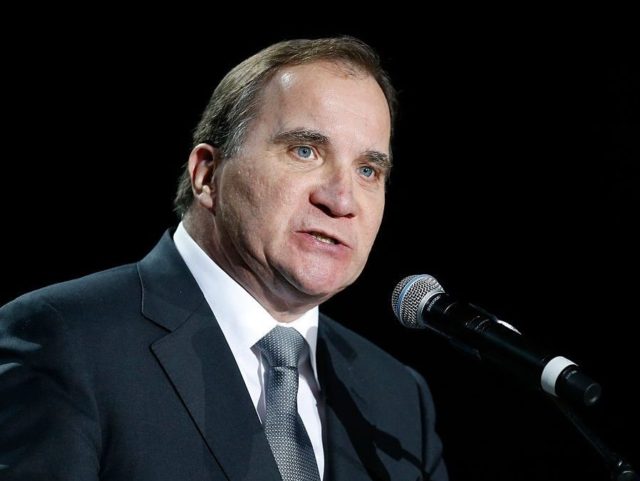 “I will continue to pursue the issue of compelling countries to accept a quota of refugees coming to Europe because all countries have a responsibility to receive asylum seekers,” Sweden’s prime minister told Aftonbladet.

Responding to the suggestion that this would be pointless, as the newspaper pointed out resistance to mandatory migrant quotas has been “growing rather than subsiding” — not only in Hungary but now across other countries in Europe — Löfven insisted that the arguments for forcing third world migrants on unwilling nations were as strong as ever.

“If we fail to implement this we will have another crisis, because the whole Schengen area is at risk unless there is cooperation [between member states] on this issue,” he said.

Asked whether he agreed that attitudes in Europe were hardening towards illegal migration, to the point that people want to “prevent refugees from reaching the continent at all”, the Swedish premier told Aftonbladet that “makes it all the more important” that migrants are shared across the bloc.

“The more countries are receiving refugees, the less of a burden it will be for each country,” he said, giving an answer which ignored the argument of Visegrád nations refusing to take a share of asylum seekers, that Europe’s illegal immigration problem is made worse, rather than better, by sharing migrants around while failing to enact proper border control.

Moving on to talk about Austria, which has taken over the rotating EU presidency, Löfven grew visibly “angry”, according to the Swedish daily, when he spoke of Chancellor Sebastian Kurz having declared that working on a common asylum policy over the six months would be a “waste of time” because it faces so much opposition.

“The presidency represents one country that is part of the EU and, since many countries think it is important that we have a common asylum policy it is his duty to drive this forward,” argued the Social Democrat leader.

At Sweden’s election earlier this month, the nation’s first since its left-wing government in 2015 welcomed 163,000 migrants — the most per capita of any EU country — Löfven’s party recorded its worst result in 100 years, while the anti-mass migration Sweden Democrats gained its highest ever share of the vote.

With the Scandinavian country seeing spiralling rates of gang violence, fatal shootings, and grenade attacks after decades of importing refugees from the world’s poorest and most violent nations, issues relating to crime and immigration dominated Swedes’ concerns during the election campaign.

Despite this, Löfven used his final pre-election pitch to voters to denounce the Sweden Democrats as peddling “hatred and extremism” in the party’s desire to end mass third world migration to Sweden.