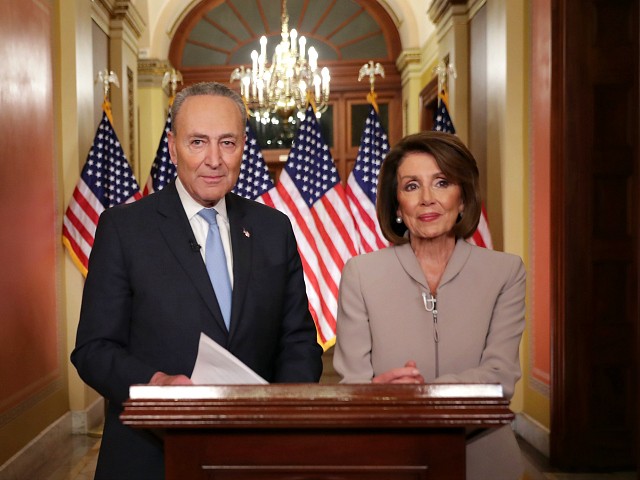 “I think President Trump’s Oval Office address was pretty straightforward and crystal clear,” remarked Martin. “Congress needs to act now and provide the funds to build the wall, and it will provide much needed border security and end the shut down once and for all.”

Martin recalled meeting with Trump with other Angel Families.

“I just wanted to go back to how [Donald Trump] referred to as as remembering us, remembering holding our hands, [and] remembering talking to us,” recounted Martin. “President Trump, we remember you. He sat across from us. He listened to our stories. He heard our cries. He watched our tears roll down our faces. This man truly cares. He’s trying to do everything in his power to secure our borders, but we have a Democratic Party who’s more concerned and focused on impeaching this great president.”

Martin remembered attending the funeral of 33-year-old police officer Ronil Singh, who was allegedly murdered by an illegal alien the day after Christmas. He said:

When I heard about the funeral, I just knew in my heart that I had to be there for that widow, just as many were there for me. I can’t even begin to tell you how many officers showed up to pay their last respects for this hero. It was such an emotional thing to watch. I sat in an overflow room with rows and rows of police officers from all across this nation, and watching the memorial video, I watched as Officer Ronil Singh was blowing little raspberry kisses no his beautiful baby boy and I was looking around the room, and everywhere I looked, I saw an officer wiping his [or] her eye as they watched what was taking place, how this life is no more, how this child will never be able to see or hear his father again.

Martin stated, “I don’t know how and when [Democrats] lost their way. Perhaps it’s just their hatred for this president that they have just decided to completely abandon the security that we need as American citizens and embrace the illegal invaders.”

Martin advised Trump to “stand his ground” to procure funding for border security.

Mansour asked Martin what her message to Trump would be regarding the partial government shut down.

“I would tell him: Remember the stories,” Martin stated. “Remember us. Remember our faces. Remember the images that we wore on our t-shirts and stand your ground. There are so many victims, and I would tell him to remember the 4,000 American citizens who are no more, they ceased to exist — in just the last two years. That alone should keep him focused on standing his ground and doing everything possible to get that border security up; get that wall up. … I think he should continue with this shut down until the Democrats realize that they too have to show a little concern over those of us who have suffered the ultimate loss.”

Martin asked, “Just how many more American citizens must be sacrificed on the Democratic altar of immorality? [Nancy Pelosi] talks about this wall being ‘immoral,’ and everything that President Trump is trying to do is ‘immoral,’ but yet, what is immoral is trying to sweep the loss of American lives under the rug, and doing everything in their power to undermine this president. That’s what’s immoral. It’s almost surreal to watch.”

Martin added, “The true immorality is what they are doing.I believe that what President Trump is doing is to try to protect and preserve American lives. End of story.”

On January 29, 1990, Martin’s husband, El Monte Police Officer Don Johnston, responded to a call from a local bank reporting that a man was attempting to cash a forged check. While shielding a civilian in the line of fire, Officer Johnston was shot in the neck by the suspect, an illegal alien, and was instantly paralyzed. He died 12 years later as result of his injuries.

“My beautiful husband took his last breath on November 22 of 2002,” said Martin. “His death was rightfully deemed an in-the-line-of-duty death. It took a few years to take him down, but that bullet did its job; it took him down.”

Martin described her husband’s degeneration of health and ultimate death as similar to that of Christopher Reeve’s story, pointing to the shared spinal cord injury.

The illegal alien who shot Martin’s husband was sentenced to 17 years imprisonment. He eventually committed suicide in jail.