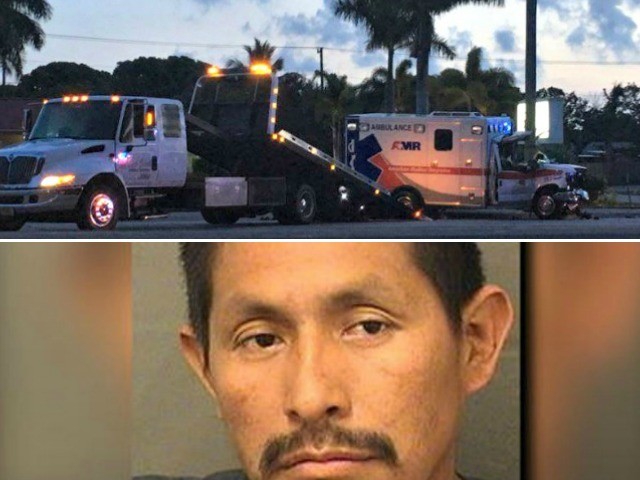 Witherspoon recalled, “My husband Paul Besaw was 36-years-old. He started as a paramedic when he was 18. He went through critical care medic training, flight medic training, field officer training. He trained other medics [and] EMTs. All he ever wanted to do was save lives, and unfortunately, at 36, he was on his way back to the station from running a call with his partner, and a guy who had been here illegally for a few years — that had been picked up by law enforcement; pulled over by law enforcement numerous times — had been drinking all day. He pulled right in front of the ambulance, and my husband died on the scene because of the accident. It was very preventable.”

Witherspoon continued, “It has been a tailspin. It has just been insane. They wanted to give the criminal bond, and he’s here illegally, so we had to fight for that. We have had to fight for, basically, our rights. The person who killed my husband and took him out of this world has more rights than myself and my daughter. it’s just been a very unfortunate learning experience about how little care we have for American people and how much more care we have for the illegals that come to our country.”

Witherspoon’s husband, 36-year-old paramedic Paul Besaw, was killed alongside his paramedic colleague, 51-year-old Lahiri Garcia, when both were struck and killed in an ambulance by Genaro Delacruz Alqui, an unlicensed drunk driving illegal alien from Guatemala.

Alqui’s blood alcohol level was 0.189 – more than triple Florida’s legal limit of 0.08 – when he killed Besaw and Garcia, said Witherspoon. He also had previous citations from police due to driving infractions, she said.

In the span of 10 years, he was cited three times for driving without a license and once for not having a tag for his car. Each time he pleaded guilty and paid a fine, according to records. On Christmas Eve 2015, he was cited for passing in a no-pass zone and paid the civil penalty.

Each time, Ajqui was pulled over by Jupiter police.

Witherspoon said, “It’s obviously something that could have been prevented on so many levels. Obviously with the wall, he would’ve never gotten in. If he had been arrested when he was pulled over numerous times, or if he was deported when he was arrested. My husband would still be here if our laws are followed.”

Witherspoon added, “We would have two men — my husband was an 18-year veteran paramedic, who again, just wanted to save lives. He was a really good guy, and I know people say that all the time about their loved ones, but he was just a guy you wanted to go if there was anything that was wrong. he was so admired by his colleagues. They would call him at twp or three o’clock in the morning if they had a problem on a call and he would answer the call and he would get them through it, and he was just that guy, and his partner was a 25-year veteran EMT. So you have these two guys that spent basically half — if not more — of their lives saving others, and now we’re left with someone who has no respect for life itself, and no respect for laws. That’s what’s replacing our true American patriots that really care for our country and our fellow men. They’re being taken out and killed, and replaced by people who could care less.”

Those who criticize the status quo of illegal immigration, noted Witherspoon, are often derided as “racist.”

“We’ve been so far beaten into submission where if you even say, ‘Listen, I’m really against illegal immigration,’ you’re automatically a racist,” stated Witherspoon. “We need people that want to stand up. I have been called a racist so many times. It used to bother me. It really did, but then I just looked at the source of where it was coming from.”

“I called my senator,” recounted Witherspoon. “I called my congresspeople, and nobody returned calls. I will call them out, right here. I called Debbie Wasserman-Schultz. We all know I’m not going to get any help from her. I called Bill Nelson. That was kind of a joke. Marco Rubio would not call me back, and finally, one of my friends told me to call Congressman Mast, and I did, and he had ICE in his office in Washington, and then they came down here and did an interview, and found that he was illegal, and had a hold put on him.”

Witherspoon noted, “A widow had to do that. Think about this. Two weeks after your husband is  killed, you have to run around and basically make the justice system work. It’s unbelievable.”

Marlow invited Witherspoon to share a message with President Donald Trump ahead of the Tuesday’s scheduled Oval Office address regarding illegal immigration, construction of a border wall, and broader border security issues.

“Build the wall,” said Witherspoon. “Fix the immigration problem. Let’s get people here that want to get here legally, and let’s take care of our country. Let’s build America. Let’s make America great. America’s always been a great country, in my eyes. I think we can make it better. We need the best. We need, like I said, even the medicore from other countries that want to come over and do better and build our country. Build the wall. Enforce our immigration laws. Quit tying the hands of ICE. Their hands are tied in so many ways. They’re underfunded. They’re underemployed. They need so much more help. Let’s put America first. Let’s protect our citizens. Let’s protect our country and keep it the most amazing place that it is.”

Witherspoon ended with a message to those skeptical of viewing illegal immigration as a national crisis.

“Look at me,” implored Witherspoon. “My husband, myself, and my daughter, we had the American Dream. At 26-years-old, he was an amazing paramedic. I do work, but I was a mostly stay-at-home mom taking care of my daughter who dances, soccer — he coached our soccer team — I’m on the PTA, and I woke up one morning with half of my life gone for a totally preventable accident. Don’t let it happen to you. Don’t be on the fringe saying, ‘This is not my problem. This is never going to affect me,’ because it is. What if your husband loses his job because they decide that they can find someone to do it cheaper and they can cut corners? What if your husband loses his company and no longer has the landscape business anymore because there are other people to do it that will be here, that will do it wrong, not be insured, and get paid a lot less?”

Witherspoon added, “What if, ultimately, you wake up one morning, and your child or your mother or your father or your husband isn’t here because they were taken away from you? Whether it’s a drunk driving accident, whether it’s a hold-up gone wrong, a murder, or a rape? Something for someone that’s here illegally that was never supposed to be here in the first place, and something as simple as building a wall and fixing our immigration system would have solved.