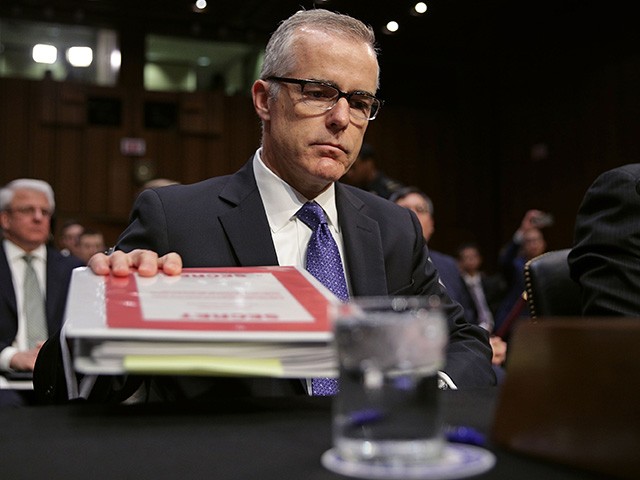 Fired FBI Deputy Director Andrew McCabe, who is currently under federal investigation for improper media disclosures, will release a book this winter chronicling his time at the bureau and serve up harsh criticism of President Donald Trump.

In a statement released Tuesday, St. Martin’s Press announced McCabe’s book, The Threat: How the FBI Protects America in the Age of Terror and Trump, will hit stores December 4. According to the publisher, the book will shine a light on “a series of troubling, contradictory, and often bizarre conversations” the ex-deep stater shared with President Trump, convincing him the “actions of this President and his administration undermine the FBI and the entire intelligence community”

“I wrote this book because the president’s attacks on me symbolize his destructive effect on the country as a whole,” a statement written by McCabe reads. “He is undermining America’s safety and security, and eroding public confidence in its institutions. His attacks on the most crucial institutions of government, and on the professionals who serve within them, should make every American stand up and take notice.”

The announcement follows reports indicating a federal investigation into McCabe’s handling of media leaks is intensifying, as prosecutors are said to have impaneled a grand jury to look into the matter. Thus far, the grand jury has summoned at least one witness to testify in the probe.

“The presence of the grand jury shows prosecutors are treating the matter seriously, locking in the accounts of witnesses who might later have to testify at a trial. But such panels are sometimes used only as investigative tools, and it remains unclear if McCabe will ultimately be charged,” The Washington Post‘s Matt Zapotosky reported earlier this month.

A spokesperson for McCabe refused to comment on the report.

Justice Department Inspector General Michael Horowitz in April concluded McCabe issued erroneous statements to U.S. officials at least four times and improperly disclosed information to Devlin Barrett, then a reporter at the Wall Street Journal, “to advance his personal interests over those of the Justice Department.”

On March 16, Attorney General Jeff Sessions terminated McCabe from the FBI on the recommendation of the bureau’s Office of Professional Responsibility.

“The FBI’s OPR then reviewed the report and underlying documents and issued a disciplinary proposal recommending the dismissal of Mr. McCabe. Both the OIG and FBI OPR reports concluded that Mr. McCabe had made an unauthorized disclosure to the news media and lacked candor − including under oath − on multiple occasions,” Sessions said in a statement at the time of McCabe’s firing. “Pursuant to Department Order 1202, and based on the report of the Inspector General, the findings of the FBI Office of Professional Responsibility, and the recommendation of the Department’s senior career official, I have terminated the employment of Andrew McCabe effective immediately.”

Prior to being officially relieved of his duties, McCabe was believed to have told colleagues he planned to step down from his post in March, when he was eligible for full pension benefits.