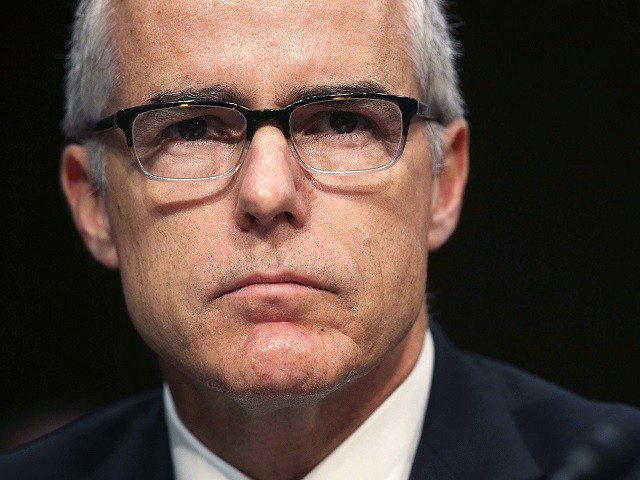 Fired FBI Deputy Director Andrew McCabe accused President Donald Trump of acting like a dictator and a mob boss in his soon-to-be-released book, according to excerpts published by the Guardian UK.

Following FBI Director James Comey’s firing, McCabe claims the president and White House counsel Don McGahn behaved like the mafia by extending their loyalty in exchange for protection from the 22-year bureau veteran.

“The president and his men were trying to work me the way a criminal brigade would operate,” McCabe writes in his book The Threat: How the FBI Protects America in the Age of Terror and Trump.

Further, McCabe reportedly compares President Trump’s tactics and style to that of dictators, citing the president’s so-called strategy of conviving “shock troops” that his enemies are traitors.

He confirms reports that Trump asked him how he voted in 2016. Having been a lifelong registered Republican, McCabe writes, he did not cast a vote for president that year. McCabe was later publicly attacked by Trump, who abused him and his wife in tweets. McCabe portrays Trump and his senior aides as frequently distracted by TV news and suspicions of leakers in the White House. He is also sharply critical of Jeff Sessions, Trump’s first attorney general, saying he had trouble focusing, frequently flew into red-faced rages and confused classified intelligence with things he had read in the media.

Trump’s “heedless bullying” and refusal to tolerate any view other than his own is “nurturing a strain of insanity in public dialogue” that is then further amplified by online media, McCabe writes.

Acting on the recommendation of the FBI’s Office of Professional Responsibility, then-Attorney General Jeff Sessions terminated McCabe on March 16 for unauthorized disclosures to the media and lacking candor, while under oath, on several occasions. As the Washington Post reported last September, federal prosecutors impaneled a grand jury as part of an investigation into whether McCabe purposely lied investigators about improperly leaking to reporters. In April, Justice Department Inspector General Michael Horowitz’s report found McCabe misled U.S. officials on at least four occasions and improperly disclosed information to then-Wall Street Journal reporter Devlin Barrett “to advance his personal interests over those of the Justice Department.”

Fired days before he was set to receive a pension, McCabe launched a GoFundMe campaign which raised over $554,000 to fund his legal defense against federal and congressional probes.

McCabe’s book is scheduled for released on February 19, 2019, by St. Martin’s Press.