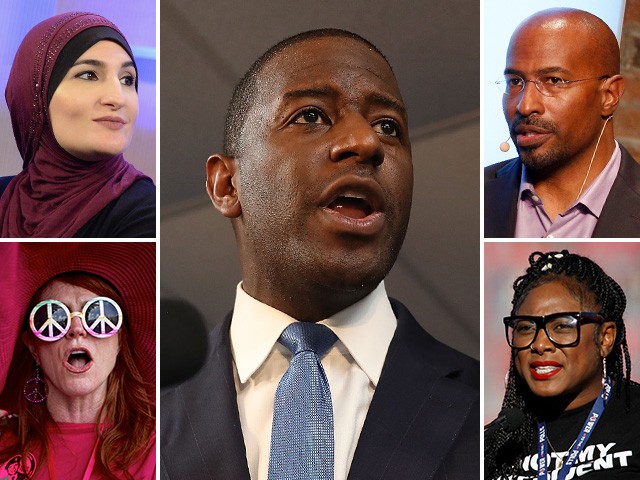 Florida gubernatorial candidate Andrew Gillum graduated from an Oakland, California-based training school for progressive revolutionaries that has spawned a list of activists who have gone on to become the who’s who of the far-left leadership world, with many taking senior positions at organizations financed by billionaire George Soros.

In scores of cases, graduates of the Rockwood Leadership Institute founded or directed notorious Soros-financed activist groups, such as Black Lives Matter, Media Matters for America, MoveOn.org and the Tides Foundation, one of the nation’s largest funders of progressive groups.

Soros’s own Open Society Foundations sent top staff to Rockwood for training. Notorious radicals Van Jones and Linda Sarsour are among the many famous names listed as alums.

Gillum is listed as a 2012 Rockwood alum. The Florida politician’s involvement with the radical school was not cursory or symbolic. Only five months ago, Gillum boasted in a speech to the Center for Environmental Health that he attended the institute “for about a year and a half.”

In that speech, Gillum talked about getting to know the Center for Environmental Health’s director Michael Green while they both attended Rockwood together. Green is also listed as a 2012 alum along with Gillum.

In 2013, Gillum, then a member of the Tallahassee City Commission, wrote that graduating the program in June of that year was a “major milestone.”

“I will continue to use the tools and methodology in life and as I advance in my career and my role as a member of the City Commission,” he stated.

Radical Linda Sarsour is listed as a Rockwood “alum in the news,” as is Alicia Garza, co-founder of Black Lives Matter.

Besides senior personalities, Rockwood also provides a “short list of foundations who have sent their staff through” its training program, including Soros’s Open Society Foundations, the Soros-financed Tides Foundation and the Soros-funded New Israel Fund.

Rockwood is in formal partnership with the Soros-funded Social Transformation Project (STP). STP was founded by Robert Gass who also founded the Rockwood Leadership Program “along with a dedicated group of environmental activists.”

Soros, meanwhile, has directly donated to organizations seeking to get Gillum elected. Days before Gillum’s Aug. 28 primary, Soros joined with billionaire Tom Steyer to lead a group of donors making a $650,000 infusion into Gillum’s coffers.

Soros also contributed to The Collective, a little-known but increasingly influential political organization that says it is seeking to build a “black political power” movement. The Collective reportedly injected nearly $2 million into Gillum’s campaign, funding television and radio ads, get-out-the-vote drives, and playing a key role in helping Gillum defeat his Democratic opponents, some of whom were better-funded and had more statewide name recognition. The group announced plans to continue backing Gillum during the current general election campaign.