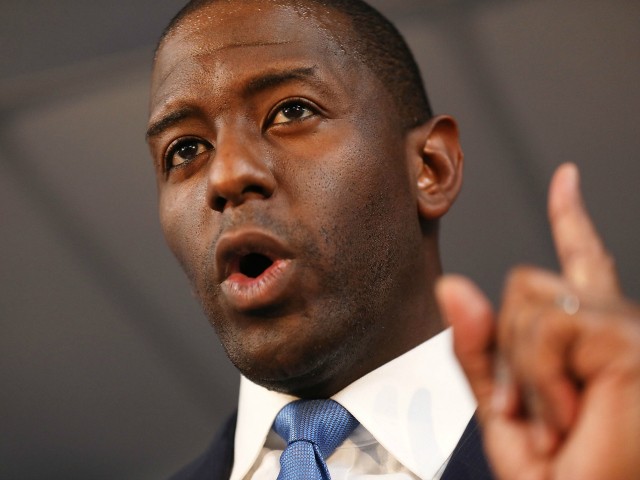 HALLIE JACKSON: Earlier this morning, Gov. Scott was asked about the individual campaigns, Flordia obviously the epicenter not just of this storm, but of the political midterm push as we are now just four weeks away. He said, “It’s up to the individual campaigns here whether they are going to pull adds or keeps adds on the airwaves.” Your Republican opponent, Ron DeSantis, is actually taking his campaign and putting it into rescue and recovery efforts, I think. He’s out there trying to help some folks. What do you make of that?

ANDREW GILLUM: Well, actually, my opponent has decided to leave all of his negative advertising up, all the way up the panhandle, including right here where we are preparing our citizens for a Category 4 hurricane impact. Those news alerts are obviously on commercial breaks, being intermittently interrupted by negative campaign ads that are untrue. I think that’s unfortunate. We can’t recall a time where candidates for state-wide office have not pulled down negative ads during hurricane season. You got a whole region of our state, where folks are fleeing for their lives, anticipating what is a life-threatening event impacting this state. I again would encourage my opponent to just subside from the politics. We’ll have plenty enough room beyond this storm to compete between our ideas. What we need now is the state to come together to reduce our partisanship and to focus on this important storm impacting our state.

JACKSON: Mayor, before I let you go, you’re riding that this is life-threatening storm bearing down on your state here. If you end up the governor and something like this were to happen, you will need federal help. You will need an emergency response and response from the federal government, and you and President Trump have a pretty bad relationship right now. How are you two supposed to work together if, in fact, this were to happen again and you were leading the state?

GILLUM: First of all, the governor’s job is to do what is in the best interest of the people of the state of Florida. The president came on the eve of this storm impacting our state and decided he wanted to attack me as a sitting mayor, who right now sits in the eye of the storm and the pathway of the trajectory of its impact. What I encouraged is that the president take the high road, that the candidate for governor take the high road, that what we need from them is leadership, not partisanship. We want a president. We want a commander-in-chief.

JACKSON: Do you see a path to working with him?

GILLUM: I do. Again, I’ve said along the trail, and, obviously, I’ll say it today: I am absolutely prepared to work with the president for the benefit of the people of our state. I think that’s what you have to do. What we can’t do is subside into partisanship and division, and, unfortunately, that’s what the president has chosen that take. I think he still has time to recover himself, especially as we go into this storm event. We are going to need the assistance of the federal government as our communities begin to repair from it.