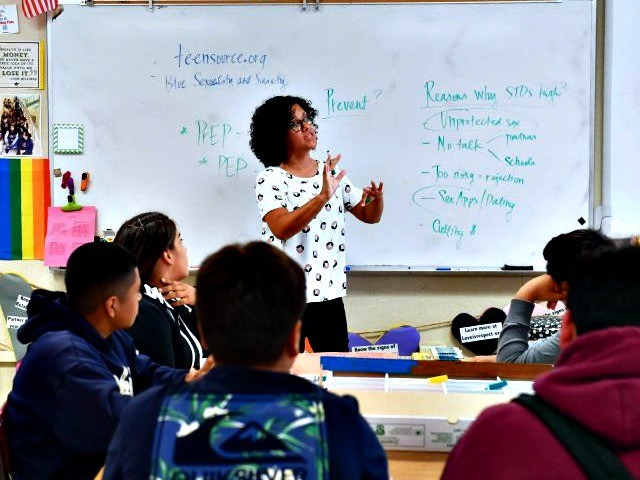 An education analyst who says the Common Core Standards have been the “worst large-scale educational failure in 40 years” told Breitbart News the business community especially propped up the education reform, primarily to provide basic skills to immigrant workers.

One of the arguments for Common Core, for education reform – which has come from the business community, primarily – is that our students are not internationally competitive, particularly in math and science skills. And the diagnosis of the problem is accurate – we’re not in the top tier. The problem has been with the prescription – that Common Core would help. In fact, it’s actually hurt – which is historic!

In a study published by Boston-based Pioneer Institute, Rebarber and co-author Neal McCluskey of Cato Institute, observed that since the federally incentivized Common Core standards were implemented in 45 states and Washington, DC, students have demonstrated sharp drops in academic performance. In addition, those students who were already performing poorly, declined even further.

“The analysis that there is a problem, that our students are not internationally competitive, is correct,” Rebarber said, explaining this problem interfaces with immigration in two ways:

Because our students are not getting the skills they need through the education system, when we bring in low-skilled people through immigration, that creates a competition: it increases the supply and, therefore, limits wage increases or creates declines.

The other aspect, though, is that our economy does need more students, particularly more graduates with mathematics or math-based STEM degrees, especially as the president brings in more manufacturing. Some of the jobs that are brought in require more engineers and, generally, you need higher skills to compete. So, the president has mentioned wanting to still bring in people from other countries who have great skills. But one of the reasons we need to do that is because our education system has not been producing those. What I would argue is, we ought to focus on helping our own students develop those skills, so that they can do those jobs, so we don’t need to skip over them and bring in people from outside the U.S. just because our students are not well-served by our education system.

In 2014, Tom Donohue, president of the U.S. Chamber of Commerce – said his organization was putting its support behind Common Core as one of the best ways to combat the “severe educational and skills gap we face” as a country.

An effective immigration system will respect the rule of law, respond to the needs of our economy, and reflect our nation’s values. https://t.co/AdMZqGIBfu #SOTU pic.twitter.com/sBhh0ckV4l

“We need a steady pipeline of talent,” he continued. “That means as one generation of American workers winds down their careers, the next one is ready to go. And we need our public K-12 education system to be the strong foundation upon which all of this is built.”

The U.S. Chamber of Commerce made support for Common Core a priority, with particular emphasis on the standards’ professed appropriateness for low-income students.

“The standards are designed to provide a foundation for what students should know at each grade level, regardless of where they live or their economic circumstances, the Chamber noted.

An effective immigration system will respect the rule of law, respond to the needs of our economy, and reflect our nation’s values.

Perhaps the most damaging aspect of the Common Core standards is not their low academic level, or the fact that they will likely result in less STEM preparedness in America rather than more. Their worst damage is bound to come from the confusion they sow among teachers and parents as to what it really means to be “college ready.”

Last week, Florida Gov. Ron DeSantis announced an executive order to eliminate the Common Core Standards – which were rebranded in the state as the Florida Standards:

Common Core has failed teachers, parents, and our children. That’s why I am issuing an Executive Order to eliminate Common Core in Florida. We will streamline standardized testing, make civics a priority in schools and increase the literacy rate. pic.twitter.com/dp5mnabiit

Rebarber said the announcement was good news, but emphasized the importance of the next step.

“I hope Gov. DeSantis not only gets rid of Common Core, but also puts a lot of thought into what replaces it,” he said. “The heavy state regulation of local curriculum that preceded Common Core also didn’t work particularly well.”

I know in Florida there are legislators that proposed allowing local communities to choose different curriculum, to measure by different tests, and not just choose the one-size-fits-all solution – which usually ends up being the lowest common denominator. Hopefully, the governor looks at this broadly and talks to people who are open to different approaches, rather than just reverting to what was there before. The governor should reach out and talk to parents and others who are not necessarily part of the education establishment within the state as well as outside.

While the emphasis in K-12 education has been on STEM courses – mostly math and science-based – in order to meet the needs of big business, fewer American students are receiving a classical education.

“We need to care about students’ knowledge of history, civics, as well as literature, and other aspects of our western culture, American culture and American civilization,” Rebarber said, adding:

Specifically, on civics and history – that’s an area that hasn’t gotten enough attention for many years. We need to make sure our students understand the history of our country, of our Constitution – where it comes from, our Judeo-Christian heritage – and the history of how we’ve created wealth. Many students now believe the wealth is there just to be redistributed by somebody. That doesn’t help. Students should learn what kind of policies have allowed us to become a wealthy nation and even have these debates over how we spend dollars.

DeSantis’s comment about his intention to identify “ways to make civics education a priority in Florida” reflects a similar goal.

“You really need to understand what makes America the country it is,” the Republican governor said.

“What unites, or what’s supposed to, is the ideas and certain principles that the country was founded on, that you see reflected in the Constitution, that have really been the focal points for a lot of the great debates we’ve had in the country’s history,” he said. “I think it’s important that when we’re sending some of these students out, they’re not only prepared for a career or for higher education, they’re prepared to discharge the duties of citizenship.”