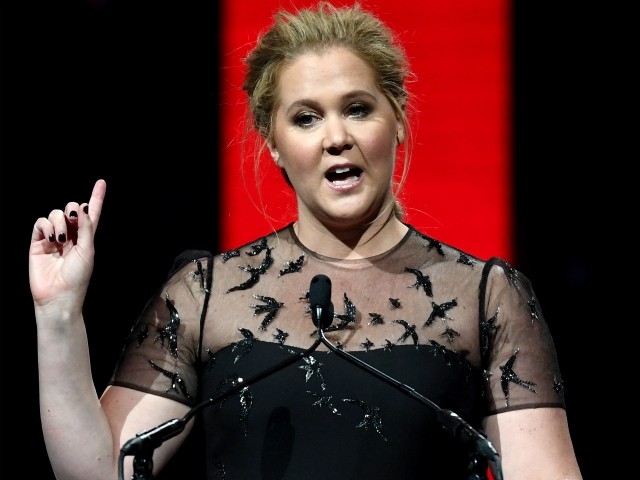 “The short version is that the For the People Act is awesome, unless you hate democracy. And I know that you don’t. You love democracy,” Schumer said in a video released by the nonprofit RepresentUs on Thursday.

The Trainwreck and star of Comedy Central’s Inside Amy Schumer asked viewers to watch the video all the way to the end, promising that by the end of the video, she will show them her young son. “At the end of the video, I’m going to show you my son, my little baby. So that is bribery, and that is because of how important this issue is,” she says.

Schumer claims H.R. 1 “mandates that politicians can’t steal our God damn elections. That sounds pretty good, right? Not taking away your right to vote?” She encourages viewers to share the video with everyone they know, insisting, “it’s not a partisan thing, it’s not about anything except for how to protect people’s rights to vote.”

The “For the People Act” — which is a staggering 791 pages long — would change American democracy, nationalizing elections, and making permanent changes to voting rules that would virtually ensure Democrats never lose another election, reports Breitbart News’ Joel Pollak.

Some provisions — like expanding access for voters with disabilities, improving election security, and ensuring that all voting machines use in U.S. elections are also manufactured in the U.S. — are not controversial but others are potentially explosive.

A few examples include the federal control over congressional elections, nationwide vote-by-mail without photo ID, gutting photo ID requirements already in place a dozen states, unlimited “ballot harvesting,” declaring that “States and localities have eroded access to the right to vote,” protection for illegal aliens who are registered to vote, changing personal information at polling places, and preventing states from purging ineligible voters from rolls, among others.

Amy Schumer was among the many left-wing Hollywood star who helped elect Joe Biden president. In October, she hosted an “I Will Vote” concert, a star-studded political event that featured performances from singers Jon Bon Jovi, Cher, John Legend, Dave Matthews, Sara Bareilles, and Black Eyed Peas, and was all meant to boast turnout for Joe Biden and Kamala Harris ahead of the election.