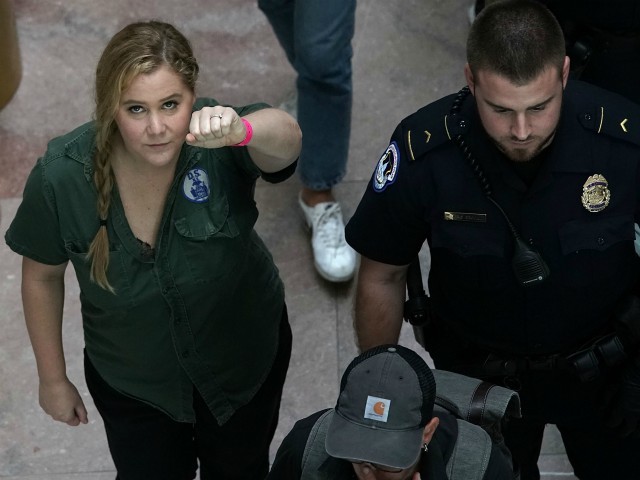 The video, which is simply captioned, “thanks @taylorswift let’s go!” is mostly made up of footage of Amy Schumer protesting, and ends with a message urging Americans to vote in the midterms this November.

There is also footage of Schumer and a small crowd listening to Sen. Susan Collins’ Thursday speech on the Senate floor from a phone. She yells “Oh, fuck you!” to something that Collins says during her speech, in which she defended Kavanaugh.
At an anti-Kavanaugh protest Thursday, Schumer was voluntarily arrested along with model and actress Emily Ratajkowski.

The 37-year-old has a long record of political statements and activism. In April, she began crying during an interview with Time, during which she called Trump’s election a “nightmare.”

In 2016, left-wing comedian said that she might move to Spain if Trump won the election, and expressed support for Hillary.

“You know, if you go, ‘Why don’t you like Hillary?’ they’ll go, ‘She lied about her emails. What else is she going to lie about?’ People get one fact and that’s what they latch on to about a candidate. They’ll go, ‘She lied about that.’ I’m like, ‘Well Donald Trump has a fake college. Donald Trump doesn’t pay his workers. He won’t release his taxes.’ There’s never been a nominee that has not released his taxes. I haven’t had a conversation with anyone who doesn’t like Hillary where they’ve had anything meaningful to say,” she said.