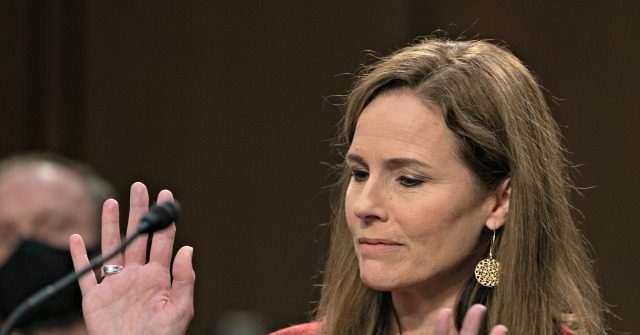 Judge Amy Coney Barrett on Tuesday dismissed a question from Sen. Amy Klobuchar, who tried to get her to weigh in on President Donald Trump’s messages on Twitter.

Klobuchar had a staffer raise a poster of one of President Donald Trump’s tweets on Twitter.

“If I win the presidency, my judicial appointments will do the right thing unlike Bush’s appointee John Roberts on ObamaCare,” Trump wrote.

Klobuchar cited other Trump messages on Twitter, predicting that a Supreme Court decision to overturn Obamacare would be a “big win.”

“Do you think we should take the president at his word?” she asked.

“Senator Klobuchar, I can’t really speak to what the president has said on Twitter,” Barrett replied. “He hasn’t said any of that to me.”

Barrett repeated that she never told Trump how she would rule in any upcoming cases.

“No one has elicited from me any commitment in a case or even brought up any commitment to a case,” she said. “I am 100 percent committed to judicial independence from political pressure.”