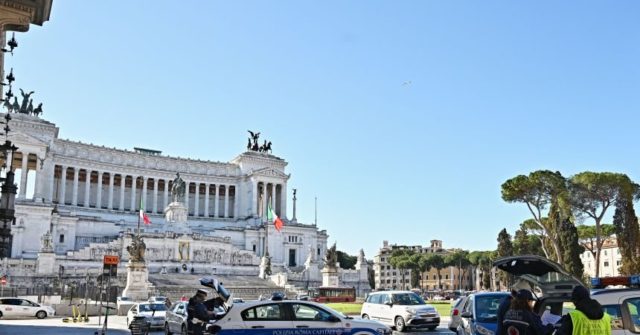 Several European states and cities are locking down yet again amid a so-called ‘third wave’ of the coronavirus pandemic, a development that comes against a backdrop of months of failures by the centralised European bureaucracy to get to grips with vaccinations, leaving former EU member Britain racing ahead like a “speedboat”.

Germany, France, Italy, and Poland are among the European nations entering or extending lockdowns this week as they experience sudden rises in coronavirus case numbers. Italy’s new lockdown began on Monday, with tens of millions of Italians being plunged into so-called ‘red zones’.

The 11 regions, which cover the majority of the country, are areas the Italian government has deemed to be particularly vulnerable to coronavirus. Inside them, all but essential businesses are closed and residents are subject to strict travel bans. Like previous Italian lockdowns, citizens must print and fill out an official Italian government form if they want permission to leave their own homes.

The French capital Paris will start a new lockdown Friday night, due to last one month. Like other European nations, the government has blamed a “third wave” of Coronavirus, the BBC reports. Like Italy, non-essential businesses would be closed and Parisians would not be allowed to travel to other parts of the country without a legal reason, and would have to fill out a government form if they wanted to.

Poland, too, will go into lockdown at midnight tonight. This will last for three weeks and comes against a backdrop of “rapidly growing” coronavirus cases, Politico reports. Again a third wave was cited.

In the central European nation, a wide range of businesses are ordered to close, including shopping malls, leisure activities like skiing and swimming, and cinemas.

Germany is eyeing further lockdowns today. Health Minister Jens Spahn said, Reuters reports, that: “The rising case numbers may mean that we cannot take further opening steps in the weeks to come. On the contrary, we may even have to take steps backwards”. Deutsche Welle claims the “third wave” of Coronavirus has begun in Germany, Europe’s largest economy.

These developments come against the rolling drama in European Union capital Brussels, with Eurocrats trying, failing, and then looking to point blame over, the bloc-wide vaccination progress. While other countries made swift progress getting contacts and orders for vaccinations in place last year, the European Union — amid claims EU member states would get vaccinations sooner and cheaper due to their collective bargaining power through Brussels — found itself captivated by bureaucratic inertia and got its orders in months late, and allegedly its contracts in poor form.

The EU has attempted to block vax exports to Britain, accused UK of blocking exports, acknowledged that UK hasn’t actually banned the export of vaccines, before immediately again implying the UK wasn’t exporting after all. That claim was repeated today. https://t.co/amBeLny96g

As things stand, the European Union has lurched from vaccine critics to vaccine crisis this year, giving enough shots to innoculate 12% of the bloc’s population. Europe’s near neighbour and former member the United Kingdom, on the other hand, has administered enough shots to give 40 per cent of people a dose. In real terms, the EU and the UK have actually given 9-in-100 and 38-in-100 people at least one shot so far.

For comparison’s sake, the United States has given 22% of people their first dose.

It is not clear whether Europe’s low levels of vaccination have left it vulnerable to the so-called third wave, necessitating the new lockdowns, or not. Nevertheless, European mainstream media sources repeatedly, if obliquely, imply there is a link.

That does not explain, however, how the United Kingdom — well ahead of the European Union on vaccinations and despite facing supply contractions due to India withholding supplies due to meet its July target to vaccinate all adults — is being told to expect another wave and lockdown later this year.

Breitbart London reported this week that, despite this vaccination success, the United Kingdom’s top statistician was predicting a “third wave” of coronavirus this autumn. He told television:”…we also need to recognise this is a virus that isn’t going to go away, and I have no doubt that in the autumn, there will be a further wave of infections.”

As things presently stand, the UK government is expected to end the lockdown — including large social events like festivals and nightclubs — “no earlier than” the 21st of June.