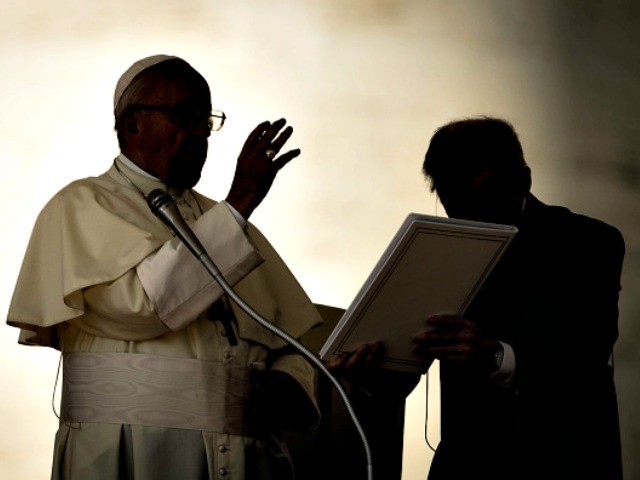 Pope Francis’s approval rating has fallen to an all-time low, according to a new CNN poll showing that fewer than 50 percent of Americans now have a favorable opinion of the pontiff.

Fewer than half of Americans (48 percent) now say they have a favorable view of the pope, CNN reported, which represents a significant drop since January 2017, when the pontiff enjoyed a two-thirds approval rating. In December 2013, the year he was elected, Francis’spopularity was higher still, with 72 percent of Americans giving the pope a favorable rating.

Early in his pontificate, Francis stressed the themes of mercy, poverty, and evangelization, which gradually gave way to emphasis on more politically charged issues such as global warming and immigration.

More recently, however, the pope has come under fire for refusing to answer allegations that he was aware of the serial homosexual predation of U.S. Cardinal Theodore McCarrick and yet elevated him to a position of prominence, allowing McCarrick to influence the naming of American bishops.

On August 25, Archbishop Carlo Maria Viganò—the former papal nuncio to the United States—released an 11-page affidavit alleging that Pope Benedict had imposed sanctions on McCarrick in 2009-2010 forbidding him from traveling, celebrating Mass in public, or participating in public meetings, but that Pope Francis later lifted these sanctions and made McCarrick a close personal counselor.

Nonetheless, when asked about these allegations, Pope Francis dodged questions from reporters, telling them to read the accusations and make their own assessment of their credibility. Asked when was the first time he had heard about the abuses committed by the former cardinal, the pope said he had no comment to make.

Following this performance, several U.S. bishops have criticized the pope for his strategy of silence, noting that such a posture is completely inadequate in the present circumstances.

Other more progressive bishops have defended the pope’s actions, saying that he has more important things to do than answer journalists’ questions.

Cardinal Blase Cupich, for instance, the archbishop of Chicago, recently told  NBC News that answering the grave allegations brought by the former nuncio was not a priority for the pope since he had more important things to worry about, such as the environment and immigration.

“The pope has a bigger agenda. He’s gotta get on with other things, of talking about the environment and protecting migrants and carrying on the work of the Church,” Cardinal Cupich said.

“We’re not going to go down a rabbit hole on this,” he added.

According to the CNN poll, the pope’s ratings have fallen even among U.S. Catholics, dropping by 20 points from 83 percent favorability a year and a half ago to 63 percent now.