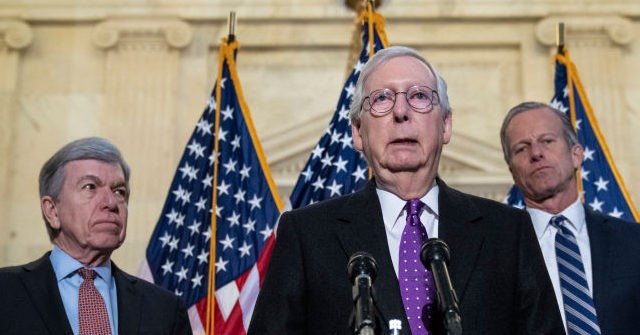 Conservatives now want to use the prospect of a government funding lapse as a way to defund President Biden’s vaccine mandates.

In an interview with Breitbart News, Manning called on Senate Republicans to back the growing effort against the vaccine mandates.

“I know Republicans are afraid to do that because they don’t want to rock the boat,” Manning said.

“Congressional Republicans must once again decide whether they will vote to fund a federal government that is enforcing tyrannical COVID-19 vaccine mandates on the American people,” Rep. Chip Roy (R-TX) wrote in the letter to Republicans.

Manning said they will urge Americans to get every Senate Republican to defund Biden’s “unconstitutional” vaccine mandates. He urged Americans to go to DefundTheMandates.com.

“Forty-one senators need to say we’re not doing this and they have to let [Sen.] Rick Shelby [R-AL] no, there is there’s no deal,” Manning said.

“Unless this is done, you don’t have the votes in advance. Then guess what? They’re all gonna own this darn thing,” he added.