Former U.S. Ambassador to Israel David Friedman’s new memoir has sold more books in its first week than any other book on Israel in the last decade, its publisher said on Thursday.

Sledgehammer: How Breaking with the Past Brought Peace to the Middle East sold more than 10,000 copies in its first week out, prompting Eric Nelson, Vice President and Editorial Director of Broadside Books, an imprint of HarperCollins, to say it was “biggest first week of sales in Bookscan for a book about Israel in nearly 10 years.”

Congratulations to David Friedman on his book SLEDGEHAMMER, which came out last Tuesday. I just checked, and it had the biggest first week of sales in Bookscan for a book about Israel in nearly 10 years.

In the memoir, Friedman writes a behind-the-scenes look at pro-Israel policies under the Trump administration, culminating with the Abraham Accords normalizing ties between Israel and the Arab world.

As Breitbart exclusively revealed prior to the book’s release date, Friedman also exposed how State Department officials, including then-Secretary of State Rex Tillerson, opposed several pro-Israel measures, including fulfilling a campaign promise made by Donald Trump to move the U.S. embassy to Jerusalem.

When it emerged that Friedman wanted to make a stop at the Western Wall, the holiest site in Judaism, after arriving in Israel, he was warned by his colleagues at the State Department, “Mr. Ambassador, don’t be so Jewish.”

A senior staffer at the State Department told then-U.S. Ambassador to Israel David Friedman in 2017, “Don’t be so Jewish.” https://t.co/ACfOYbkPrG

Friedman cites one senior official as saying: “Don’t be so Jewish. You represent the United States of America. Tone down the Judaism in your work.”

Former Israeli Ambassador to the U.S. Michael Oren, who served as envoy during the rocky Obama-Netanyahu years, told Breitbart the bombshell revelation came as “no surprise.”

“The State Department wouldn’t be sympathetic to David [Friedman], who’s an orthodox Jew who speaks openly about God,” Oren said. 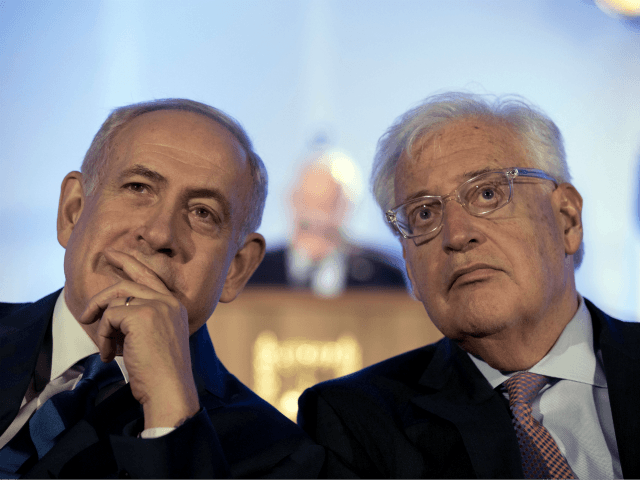 Israeli Prime Minister Benjamin Netanyahu, left and David Friedman, right, the new U.S. Ambassador to Israel attend a ceremony celebrating the 50th anniversary of the liberation and unification of Jerusalem, in the Old City, Sunday, May 21, 2017. (Abir Sultan/Pool Photo via AP)

“But telling him to tone down his Jewishness? Well that’s like telling the ambassador to the Holy ‘See in Vatican City, ‘don’t be too Catholic.’”

“Or else telling the Muslim Ambassador to Cairo, ‘Don’t be too Muslim. It would never be said,” Oren concluded.

Friedman recollects his angry response to the unnamed official: “Do you think I am under any disillusion as to who I represent? I’m not a politically correct person but I have to ask you, why do the laws of political correctness not apply to Jews?”