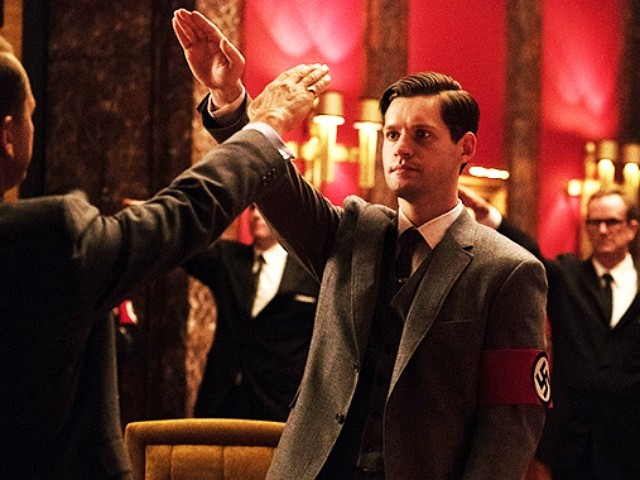 An advertisement for the popular Amazon Studios series The Man in the High Castle aired during the 70th Emmy Awards Sunday. The advert depicts the drama’s lead character states “we are the resistance” paralleling a common phrase used by anti-Trump protestors.

The video opens with characters cutting up a flag featuring a swastika and re-sewing it to resemble the flag of peace. The short trailer features a number of scenes of destruction including a clip of the Statue of Liberty toppling to the ground.
Amidst the destruction, the lead character of the show, portrayed by actress Alexa Davalos, says, “This world will not last, help me change it… Join us, we are the resistance.” Though the show’s use of the term predates the anti-Trump “Resistance” seen in Hollywood and other spaces, the timing of the ad — airing during an Emmy Awards show that featured a slew of skewering remarks toward Republicans and that party’s president — is noteworthy.
Indeed, the Emmy Award show was quite politically charged. Breitbart Hollywood editor Jerome Hudson reported a number of overtly political moments from earlier in the night on the Breitbart News Emmy live wire:

The co-hosts came cracking jokes about NBC’s nominations, award show ratings, and sexual harrassemnt, and race. Cuz the one thing hollywood needs right now is people losing their inhabitions during a work function.

“And we all agreed that Nazis were bad,” Colin said. “Roseanne was cancelled by herself, but picked up by white nationalist,” Jost joked.

“One step closer to a black Sheldon,” Thompson joked. “Diversity is not a problem in Hollywood anymore,” McKinnon siad as the pair began to sing and dance the celebration of solving diveristy. They were later joined by Titus Tituss Burgess

The Emmy Awards live wire coverage can be seen here.