Hollywood activist Alyssa Milano was attacked by many of her followers Monday after she defended former vice president Joe Biden amid controversy over his alleged inappropriate behavior around women.

“I am proud to call Joe Biden a friend,” Alyssa Milano said in a social media post. “He has been a leader and a champion on fighting violence against women for many years, and I have been fortunate to accompany him to events with survivors where he has listened to their stories, empathized with them, and comforted them.”

Milano also described Biden as a “warm, generous individual who believes its on all of us to pay attention to women’s stories and experiences.”

2. That’s who Joe Biden is – a warm, generous individual who believes its on all of us to pay attention to women’s stories and experiences.

“Joe Biden’s response that he never meant to make anyone uncomfortable and that he’ll listen and learn from anyone who says otherwise is exactly the leadership we need to build a culture where women are heard and are equal,” the star also said.

“I respect Lucy Flores’ decision to share her story and agree with Biden that we all must pay attention to it. But, just as we must believe women that decide to come forward, we cannot assume all women’s experiences are the same.”

5. I respect Lucy Flores’ decision to share her story and agree with Biden that we all must pay attention to it. But, just as we must believe women that decide to come forward, we cannot assume all women’s experiences are the same.

“I believe that Joe Biden’s intent has never been to make anyone uncomfortable, and that his kind, empathetic leadership is what our country needs. Especially now,” the Charmed actress said.

Milano’s defense of Biden angered many social media users, both liberal and conservative.

What about the tiny children that were visibly uncomfortable with being forcibly kissed and stroked? Anyone with eyes can see how uncomfortable they are. One tiny girl raised her shoulders and her arm against his advances, but he just kept it up. Be objective.

WITAF? I wouldn’t let Joe Biden any where near a women. The man molestest them right in front of cameras.

You don’t get to make up arbitrary rules anymore. You personally assisted in the destruction of a good man in which zero evidence existed. We have hundreds of photos of Biden doing worse. Hundreds Alyssa!!

like the way he disrespected Anita Hill? threw her to the lions? read history.. not rewrite it.

I think if “kind & empathetic” are going to be what you base your vote on, @BernieSanders or @TulsiGabbard make a MUCH more compelling argument…like a “not close” argument. Creep factor aside, lets go to the voting record shall we? LOOK don’t LISTEN #OrwellmeetsIdiocracy

Yikes. So having good interactions with a man means we should silence the women who come forward with stories against them? Don’t go all @lenadunham on us. Stories of abuse are important (even more so) when inconvenient. P.S: I guess #whitefeminism ain’t a myth after all. pic.twitter.com/JO0zLmr4BC

Biden, who is widely considered a possible 2020 frontrunner, has been the center of scrutiny over the past week after being accused of inappropriate behavior around women.

“He put his hand around my neck and pulled me in to rub noses with me. When he was pulling me in, I thought he was going to kiss me on the mouth,” Lappos said.

In response to Flores’ story, Biden said in a statement that it was never his intention to act “inappropriately,” but also said that he might not remember such incidents the same way.

“In my years on the campaign trail and in public life, I have offered countless handshakes, hugs, expressions of affection, support and comfort. And not once — never — did I believe I acted inappropriately. If it is suggested I did so, I will listen respectfully. But it was never my intention,” he said.

“I may not recall these moments the same way, and I may be surprised at what I hear. But we have arrived at an important time when women feel they can and should relate their experiences, and men should pay attention. And I will.”

Milano’s defense of Biden comes after she enthusiastically joined in on the Hollywood smear campaign against Supreme Court Justice Brett Kavanaugh last year. 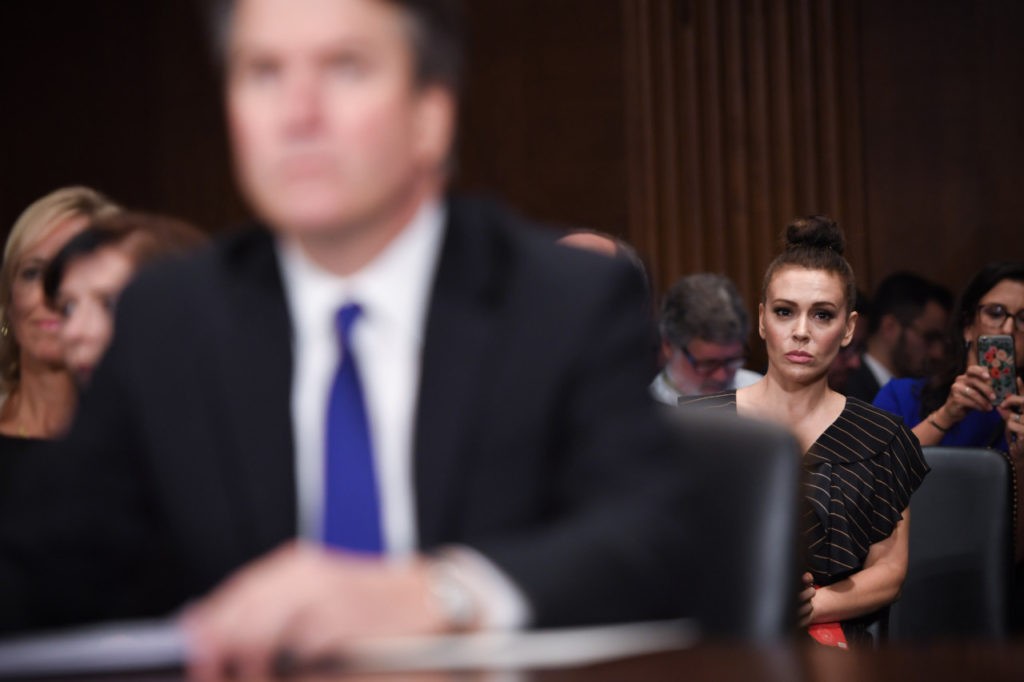 The 46-year-old activist urged her fans to “bang down” the doors of Senators to stop the confirmation of Kavanaugh.