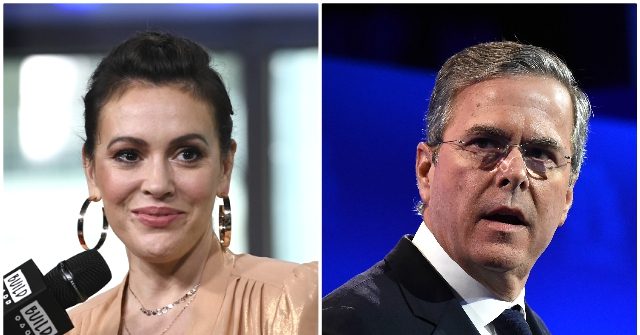 “If [I] were @JebBush, I’d seriously be considering a run,” Milano said to her 3.6 million Twitter followers.

If were @JebBush, I’d seriously be considering a run.

The tweet could signal hesitancy among Democrats. While over 20 candidates are vying to challenge Trump in 2020, some Democrats – such as Milano – are actively hoping for a Republican to successfully primary the president as well.

“Be careful what you wish for,” Kaisch spokesman John Weaver said in response to Trump’s comments during an interview with Fox News’ Harris Faulkner last year, welcoming the potential challenge.

“All of my options remain on the table,” Kasich said during a CNN interview in April. “I don’t wake up every day looking at polls or thinking about me and my political future. I just want to be a good voice.”

“All of my options remain on the table,” former Ohio Gov. @JohnKasich tells @jimsciutto about a possible 2020 challenge to President Trump. https://t.co/aPt5g2WbsB pic.twitter.com/oBhyknZp2e

However, Kasich ultimately conceded in May, admitting that no viable path to victory existed.

“There is no path right now for me. I don’t see a way to get there,” the Never Trumper told CNN.

“There is no path right now for me” to run for President, former Ohio Gov. @JohnKasich tells @jimsciutto.

“I don’t see a way to get there. 90% of the Republican party supports him.” pic.twitter.com/cqaCtvvcwg

Former Massachusetts Gov. Bill Weld (R) launched an official White House bid in April, stating that he would be “ashamed” if he did not “raise my hand and run.”

“I really think if we have six more years of the same stuff we’ve had out of the White House the last two years, that would be a political tragedy, and I would fear for the republic,” he told CNN’s The Lead in April.

Weld’s second quarter fundraising numbers are – by most standards – abysmal. He raised $688,000 from just 7,000 donors. Reason put this in greater perspective, noting that Democrat Montana Gov. Steve Bullock – who is currently running for president and failed to make the first round of debates – raised $2 million this quarter.

Bush, who earned the nickname “Low Energy Jeb” during the Republican primary race, has not signaled any intentions of challenging Trump, although he told CNN contributor David Axelrod that someone else should.

“I think someone should run just because Republicans ought to be given a choice…” Bush told Axelrod during a March interview. “It’s hard to beat a sitting President, but to have a conversation about what it is to be a conservative, I think it’s important.”