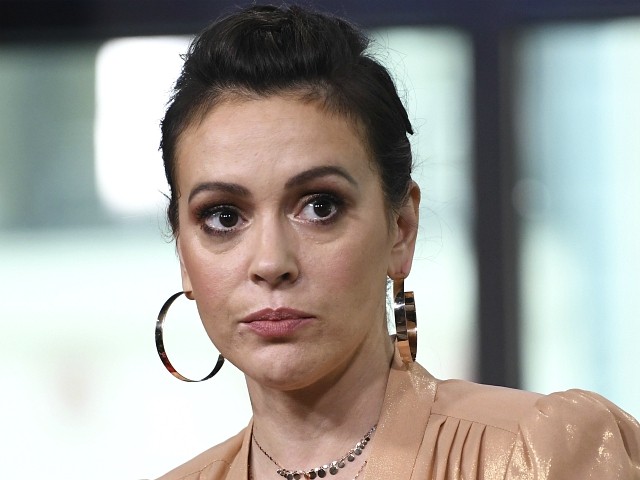 Tuesday on MSNBC’s “Live,” actress Alyssa Milano said she was “filled with rage” because when people like President Donald Trump and Supreme Court associate justice Brett Kavanaugh are put in positions of power, it means “sexual abuse has been institutionalized in this country.”

Milano said, “I’m filled with a lot of rage. It started last night. I couldn’t sleep at all last night. I can’t believe this is where we are. We are making distinct choices about what we want to be as a country. We’re making distinct choices about the people we’re putting in positions of power, whether it be Trump or Kavanaugh or our institutions. Sexual abuse has been institutionalized in this country, and it is heartbreaking for me. I don’t think we can allow another generation of women and children to feel as though their government isn’t listening, that doesn’t care, and they are invisible. I’m filled with rage, for Sarah to go on and say he was just stating the facts. The sky blue. I can state that fact. If I do it totally a little off, like the sky is blue, I’m mocking someone that may have said that. Tone is everything right now. We are making a choice. The Republican party is making a choice to back this man and this administration in this time, right now, right here and history will reflect upon this time as being devastating. I will tell you this; 34 days till the midterm election, there were 800,000 new voters on voter registration day. I think women, I think survivors, I think men are not going to allow this to continue. We’re going to take back the House and maybe even the Senate.”

She continued, “I will also add that 80% of victims of sexual assault do not report at all. We’re talking about a very minuscule point of women that are falsely reporting. Also, men are having a hard time right now. I mean, come on. I feel as though he’s completely belittling the intelligence of the American people.”

She added, “Do they agree with him or is he using some sort of cult-like force to try to make them see that? I’m not sure if you were to have a real conversation with any American whether they be Democrat or Republican, that they would side with this kind of behavior where we’ve reached a low we’re mocking people and their stories of hurt and of pain. Who are we? Who do we want to be as a country? What are we trying to project to the young people of this world, to the young people of this country? It’s heartbreaking to me. I think yes, we’re in a time that’s very gray. This is the #MeToo generation. What is happening right now is we’re defining boundaries. Boundaries that have never been defined before. As Trump might say that white men have it very difficult right now, I’m saying that women, young people, have had it difficult for generations and generations and generations. We will not be silenced any longer. If that means that men have a hard time right now, then I’m sorry, this is the way the pendulum has to shift for us to have the equality and security in our country and our societal views of what it means to be a woman. We are considered less than. We cannot stand for it anymore.”